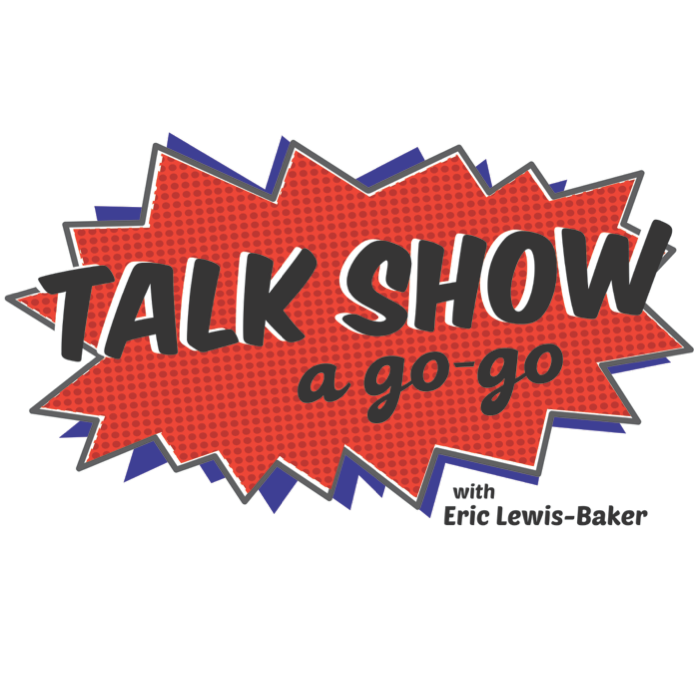 Talk Show a Go-Go is an in-home, late-night style talk show that all takes place in the Chicago north side apartment of Eric Lewis-Baker, Connor King, and Matthew Heston. Filling their living room with a studio audience, once a month they put on a show full of interviews, sketch comedy and music with the intention of being as goofy as humanly possible.

Born out of the brains of Lewis-Baker and producer Ethan Krupp, the original plan for Talk Show a Go-Go was to have it be on the go-go, moving from house to house interviewing residents as if they were celebrities and performing sketches. Though the show has maintained its home base near Ravenswood, the team behind Talk Show a Go-Go still hopes to move the show around the country and into public spaces.

This Saturday, Talk Show a Go-Go will feature Chicago legend Doug Sohn from Hot Doug’s, and besides writing a million wiener jokes for the episode, the team got inspired by Doug’s philanthropic nature and will be giving half of the show’s donations from the episode to The Intonation Music Workshop (www.intonationmusic.org), an organization close to Doug’s heart that does great work with music education in Chicago.

Comedy Scene of Chicago interviewed Talk Show a Go-Go host Eric Lewis-Baker about the show’s creative process, most memorable episodes and what new audience members can look forward to when they walk into a Talk Show a Go-Go taping. 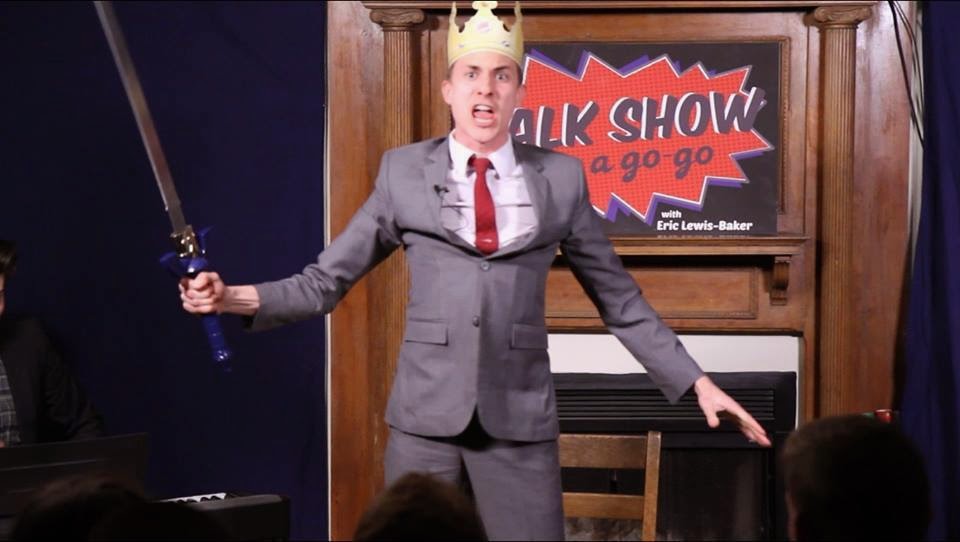 We have many influences for the show. I'm a sucker for really goofy, silly stuff, and I love the smart-dumb humor of "The Jerk", "Zoolander," and "Dumb and Dumber." Steve Martin is the man. I also love David Wain (and the whole "The State" crew), I think "Stella" and "Wet Hot American Summer" are two of the funniest things you can watch. In terms of talk shows, we love both the surreal-ness of "Comedy Bang! Bang!" and the fun, party vibe of Fallon.

How does the writing process for something like this work for you guys?

The writing process is usually one month of weekly meetings. We start with the pitch meeting, and everyone brings about 4-5 ideas to pitch for the episode. We kick around the ones we like, and then decide which ones to focus on writing for that week. At the next meeting, we read over first drafts, and decide what's going in the show. At the third meeting, we do final edits and decide the running order. That week, we do a dress rehearsal, and on the following Saturday, we do our tech rehearsal and then the show. The tech has all three cameramen, our sound guy, the whole deal. 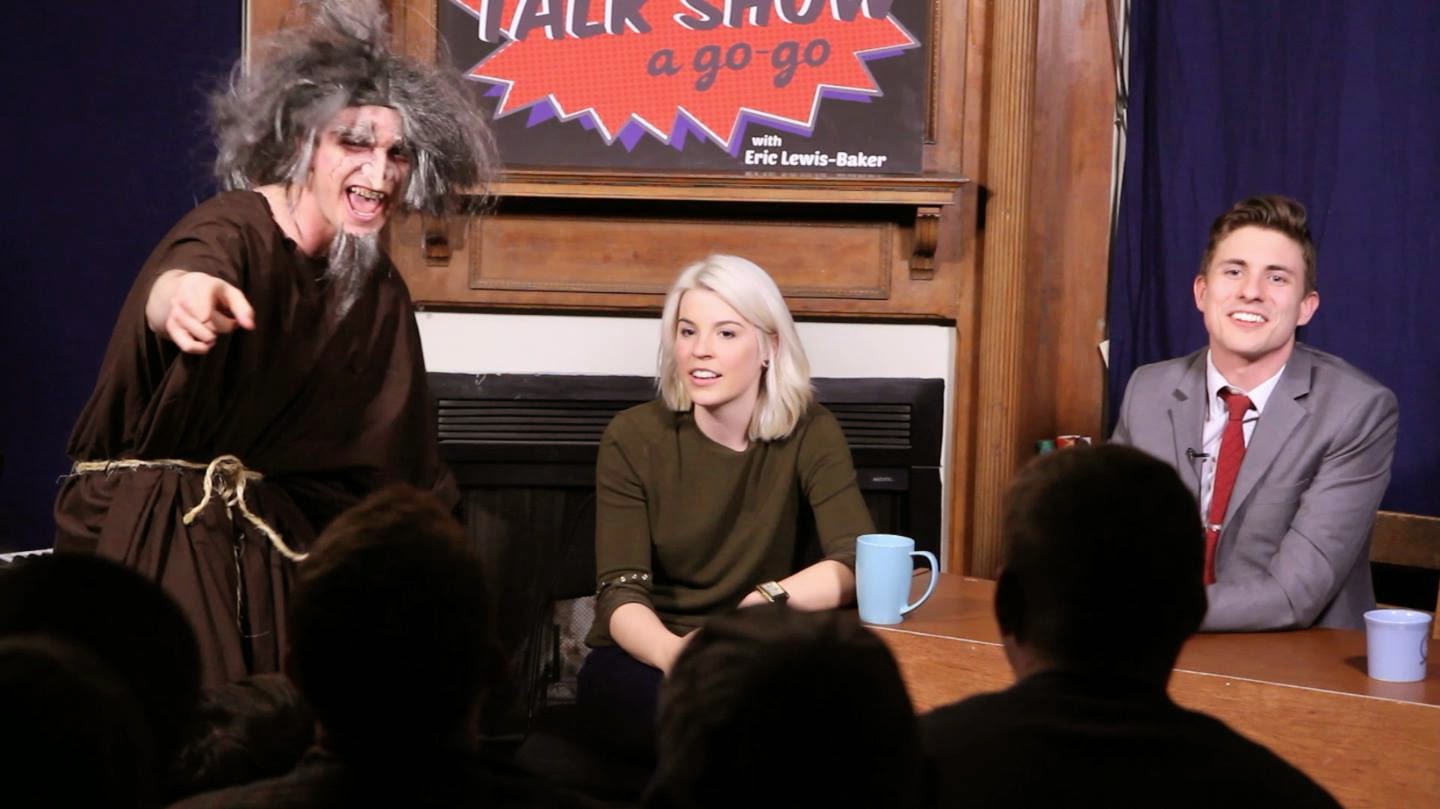 What should new audience members expect walking into the show?

We want our audience to feel like they're coming to a really fun party at our house, and the party starts with a show. We pass out beers and give out prizes. Keeping the live experience engaging is important to us, and it's all about maintaining the momentum. We shoot for as little downtime between segments as possible, and our talk show band Dave (we only have room for one guy) is a big part of that. He’s like a wind-up toy, and in between bits, he plays piano and improvises the most beautiful nonsense for as long as we need him to. Beyond that, this show is not only a platform for us, it's a platform for the people we love, think are hilarious, and make Chicago a bad ass place. We open every show with a warm-up comic, have some type of feature performance, be it stand up, improv, sketch, etc., and then end with a musical act. And in between, we interview dope people such as Alex Honnet, Dina Facklis, and the founders of Shithole. Now to be fair, I also interview my mom during most episodes. She doesn't live in Chicago, so we have to Skype her in, but Mama has been a big hit. The meaner she is to me, the more people love her.

What are some of the most memorable a Go-Go moments so far?


The beginning and end of the first episode are very distinct for me, since we had finally (after a year of gestation) gotten the show on its feet. Interviewing Mama for the first time and having her slay was awesome. Hearing Dina Facklis rip on Nicolas Cage is a favorite moment, as is Gary the Troll. That character was our first foray into serious makeup and production, and seeing the audience reaction to this way-too-realistic troll was great. When you decide to spend over $100 on a troll character, you really hope it hits.