Whatever happened to that dude?

Remember that comic? You know the guy who would go up scream "Karate! Karate!" then leave?

I really love Chicago stand-up comedy. It's not as weird as I remembered, but it's definitely more inviting. Sometimes on a road, my drunk driver comedian friend will ask me, "Whatever happened to this comic?", or "Hey! I remember that guy!". Usually it's in the form of really bad comedians, really weird comedians, or really awesome comedians who just stopped performing.

I'm going to do a little background information so you can experience the brutality of performing and the dedication people had in this scene. I remember there was only a handful of open-mics six or seven years ago, some good, some bad and usually poorly attended. The first time I signed up at Mix (which was at that time called Crush and before that another name I can't seem to remember right now), I was number 50 on the list. The audience, who were also the comedians, dwindled at the end of the night and literally three comedians stared at you doing your threesome with a horse bit. It somehow "burned" and closed a few years ago. That's "too bad". But the memories of the performers were awesome. 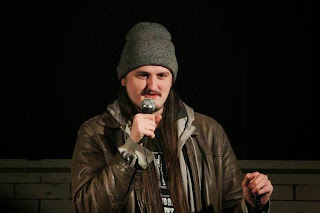 Some of my favorite comedians and also whatever is the opposite of favorite comedians, I first saw at
the Mix open-mic. At the time, there was no Myspace or Facebook, so you had to pick up a paper or ask around where shows or open-mics are held because websites weren't really keeping up with the closed open-mics and newer open-mics. The Lyons Den closed (look up the Chicago's Reader's article on the Chicago Lyon's Den open-mic for a great historical perspective on Chicago stand-up comedy), so usually people said, check out the Mix.

My God, I've seen more comedians go up only once at this mic never to be seen again. Hundreds upon hundred of aspiring comedians. I've eaten my balls so hard there so many times, I consider it a badge of honor. You could see the persistent people continue to go up and up and eat it and suck it and crap out and fuck up and be embarrassed. [Don't correct my grammar here, leave my intentional fucked up sentences alone, James]. Anyway, it sucked and everyone hated it. But not me, oh no. I enjoyed every minute of it. The weirdness, the bombing, the no audience, and the cigarettes you could still smoke in a bar in this free city of Chicago. It was home to me. This is the place I learned to laugh WITH people, and also to LAUGH AT people, and if you were doing something really great I was awestruck.

I found a bunch of youtube clips that do some people justice and others don't do justice. For those stories, I'll just relate what I remember. This includes all the interesting people from then till now, who I don't see anymore.

Steve Mulcahy: He was just one of the best, and I don't know why he doesn't perform anymore. He always made me laugh, even if there was three people in the audience. Even when a joke didn't work, he'd cock his head to the side and do a smirk like "ok". I think the only way to describe it is he's telling a really great written joke, but delivered in a sarcastic manner as though he saying, that's a great joke that didn't get any reaction, I'll blame you, the audience. It could be a pun or whatever, and he'd just strut like he cured Polio. Last time I saw him it was at Schubas a couple years ago, he did a quick one-liner pun, high fived each and everyone in the audience, then left. He was up there for about 20 seconds. No stand-up clip can really show his greatness. Too bad, but here's something he did.

Shawn Cole: Probably the funniest, craziest person in the world. Never the same set or mind frame. He was just himself. C.J. Sullivan told me a story where at an open-mic, a half-mentally handicapped comedian, not fully, just half handicapped, went up and bombed terribly, with people laughing behind his back. Shawn goes right after him, takes out a piece of paper, goes up to an audience member and says "What the fuck does that say on there?". The lady is confused, shakes her head, I don't know. "Gimme that!" he said, and takes the paper to another audience member. "What does that say?". Audience member again shakes their head, I don't know. He does this to three or four more times. "Gimme that fucking paper!". "It says, this guy has fucking HEART!". Whole place goes nuts. At the end of his set the comedians look at the paper, and surprise, it was completely blank. Everyone is in bedlam, going crazy, and he didn't even plan what he was going to say. Simply awe-inspiring. Last time I saw his was at Schubas where he did his shtick in front of old friends.  I heard stories he lives in Montana as a logger now. This clip captures his awesomeness.

Summer Neville: Talk about a comedian with balls or ovaries for the let's make this about men vs. women bullshit that's never going to end. She'd do mostly southside black rooms or more ethnic rooms and she'd kill it every time I saw her. I heard she was studying to be a nun, but decided on stand-up comedy for a moment in her life. I still to this day have never seen an original non-Lampanelli put down comedian better than her and I still wonder what happened to her. Last time I saw her was at the Mix in front of two bitter comedians never to be seen again. She disappeared and probably is leading a happy life. She figured it our before all of us.

Joe the Comedian: When I first heard "the Tom Cruise CRUISE Cruise" bit, I laughed for a minute straight from the delirium from waiting for five hours, It was so dumb. Then he would do his jacking off with "SANDpaper hands….sandpaper hands", then reach into his pants, bust a fake blood packet and pull out blood stained hands. I believe he's a performance artist living in L.A. now. The clip I found shows the brutal nature of the mix. Zero laughs and pure misery.

The bugged out eye man: He'd go up and pretend he was a schoolteacher. "Ok, everyone, can you say this word with me?" the audience would start to repeat his phrase and he'd stop them "wait, wait wait, we don't want to go too fast". He reminded me of those people who can pop out their eyeballs out from those Guinness world record shows on TV. Couldn't find a clip, and don't remember his name. Saw him at Hoghead McDunnas (now Ace Bar) about 3 years ago doing the same four minutes.

Spiderman: This guy would go up in a full Spiderman costume, pretend he was retarded, then yell at the crowd. "I'm funny! why aren't you laughing". Then he'd curl up in the corner for the remainder of the open-mic. And he'd wait hours curled up in a corner til the open-mic was over. Afterwards, he'd crawl outside when the show was done, and you'd see him running down the street in full Spiderman costume to his car. Never revealing his identity. I met him last year, he admitted he was THAT spiderman. He was just a normal dude and seemed to be really embarrassed that I remembered his act. No clip, Peter Parker can only film Spiderman.

Second City hot shots: Often times you'd get a few Sketch or Improv guys to the open-mics, who had no experience whatsoever doing stand-up. There's a few really good sketch and improv comedians that started through sketch/improv, but a lot were really terrible. They would go up with names like "The Shuffler", "Mystery Sauce", or some fake name and then try to improv some jokes. About thirty seconds in, panic would show on their faces, and I'd begin to laugh really hard. The no laughs to every sentence and seeing their face turn beet red would put me in hysterics. It was because there was so much cockiness when they entered the stage then seeing them wearing their best fedora hat pulled over their yes, just being torn to pieces expecting a huge response from drunks. Then they'd leave the stage in their real persona.  A sad college drop out from some shit town nobody cares about. No clip.

The Crackhead: A real crackhead goes on stage. He says he's really funny. He wants to be on the list. He might be doing a character. Nope, just a crackhead. The audience starts to laugh to themselves, like they know whats going on. It's just a crackhead on stage and we're drinking beer watching this. The host then has to pull him off stage because he has no idea what the light means (please get off the stage.  I had no idea he was a crackhead), and the comedians and audience can't believe we just saw a crackhead. What a respectable profession stand up is… Even crackheads think they can do stand-up. Patton Oswalt describes it best in this story. (About a nodding off junkie named "Doctor Pepper" at an open mic)


I really do miss seeing all these people preform. I could tell the talent was in them, yet many didn't see it that way.  It didn't matter to chase a stand-up dream, which I also respect. They just wanted to lead they're own lives. Almost like rock and roll without the celeb status. Forgotten performers being discussed by working comics in a beat up car reminiscing about those good old awful days will always be special and put a smile on my face.