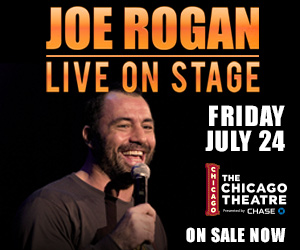 Woooah. I know it's a bit last minute, but the one and only Joe Rogan is in town tonight and will be doing his wild-man thing at the Chicago theater for one night only. If you know Rogan then you know he's one of the hardest working comics in the country. If your not that familiar with his stand-up, then think of this show as the perfect opportunity to catch him live. Rogan is a true jack of all trades when it comes to entertainment. He's an absolute stalwart on the national stand-up scene, a podcast monster, respected stand-up comedian, actor, martial artist, and sports commentator. Known for his commentating for the UFC commentating and long rants on conspiracy theories. Tonight only at The Chicago Theatre.

Here are a few other comedy options for the weekend...

Miss Ali's FUNdraiser show & kickstarter
Friday at 8:00pm
at Dukes Bar and Grill
Chicago comedian Ali Clayton recently had her car stolen...
So a FUNDRAISER will be held to help her replace some of the stuff she lost.
So come on by to show your love
DONATE HERE: https://life.indiegogo.com/fundraisers/ali-clayton-s-stolen-underwear-and-car-fundraiser
Friday at 8:00PM 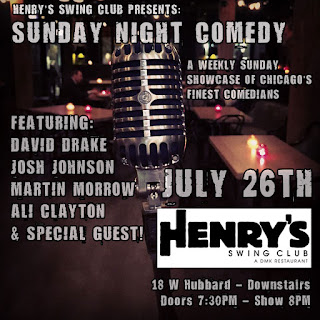 Black Box Comedy Presents: Zach Peterson! One night only!
at The WIP Theater
Saturday at 10:00PM