(Editors note: Chicago comedy scene stalwart Michael Shapiro, passed away a day ago at the tragic age of 25. Anyone that met him knew he was a sincere and genuine person - quick with a joke and a good word. He will be missed. Fellow comedian Nick Sierra wrote this in his honor)

I did stand up comedy for about five years, I stopped on Dec 4 2013, and even though I have missed it every day, I have been very slow going back. See, over that five years, I was treating myself very poorly (especially for the last few years, after a very turbulent experience in my personal life) and I unknowingly started to develop Type 2 Diabetes, while it wasn't the precise reason I had to stop, it was most of the reason. I was having problems at work, and it turns out insulin and blood sugar play a bigger part than you'd think in how your brain functions.

I didn't find out how sick I was until 8 months after I had stopped. I had turned 30 right after deciding I had to stop, which was a decision I made during the month in which I had booked the highest number of, and highest profiled, shows I had ever done. The second to last show I ever did was at pH Theater, and it was the best set of my life. The last show I did was featuring in front of Marty DeRosa, I bombed because Marty makes me so nervous (I'm never just another comedian around Marty, I'm only ever a fanboy, guy's a monster) and for a couple of other reasons. 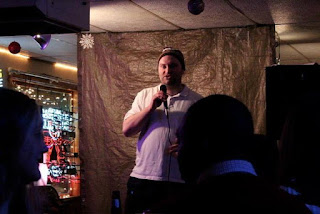 When I finally went to the doctor, it was about three months before my 31st birthday, and I had made a promise to myself to finally go to the doctor and get a check-up after I turned thirty, knowing full well I had spent my twenties putting a sizable down payment on whatever health problems my future inevitably held as a 300+lb heavy drinking cigarette smoker. When my blood test results came back my doctor called me and said:

"You have diabetes... And you have had it for a while."

I had gotten really, really sick. Terrified, I made a lot of life changes in the next few weeks, but one of the first things that happened was that I went to CYSK. As always, Danny Kallas was genuinely interested to hear what I had been up to since he hadn't seen me in so long, and genuinely concerned when I told him. More than that, though, he had something to tell me:

"You'll be back. I know you Nicky, you don't know anything else to do but get on stage."

I wasn't so sure.

A couple months later, I met a girl. Then I went through some real serious mental health issues and I lost the girl. It was the kind of thing that made me so sad I HAD to find a way to laugh at it. After that, I only knew one thing to do.

Baby Comics, learn this before anything else:

Listen to everything Danny Kallas tells you. 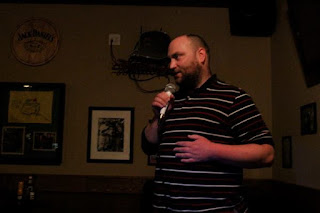 I went out to do some jokes about my break up on a Tuesday in early March, and they got a tiny laugh. Two days later, I decided to go to my friend Michael Shapiro's open mic at The Blarney Stone. He hugged me and then he snuck me in about 20 minutes after I got there, because I can't be out all night anymore. He called me "Buddy" about 30 times. I had a good set, and an even better time. It was like that around Mike for me.

Shapiro and I met when he was late to host a showcase I was going to be closing, and after about a half hour I just started to host the show myself. He showed up about 2 comedians in and took over as host, but I had a hard time taking him seriously. I mostly look for comedy in the literal, in logic and in real life. Mike, especially at that point, was not making his comedy from that kind of place. He apologized profusely about being late. In real life, punctuality is not one of my strong points, but in comedy, I tried my absolute hardest to be where asked to be, when asked to be there. I told him so. It ended up kind of setting the tone of our relationship, which I have come to understand was pretty different than most people's relationships with him.

When I was part of the team that produced Wonder Bar Comedy, Shapiro sent us quite a few inquiries about performing, but he was very new, and we were charging admission at a time when it was not very common to do so, and so we didn't feel like we wanted to be putting beginning comedians on stage.

Except for our interns.

Shout out to every intern we ever had. Samuel Priest, Andy Boyle, Rachel Kaboff, Keith Evans and David Rader. Most especially Rachel and David, no one, producers included, did more to make sure that Wonder Bar Comedy happened week in and week out than those two. Rachel would ride a bike that weighed 30% of what she did in pouring-ass freezing rain to do manual labor for drinks, stage time and occasionally a meal. David did so much that when Kyle Scanlan graduated to the hallowed cast of the Lincoln Lodge, we took him on as producer. He just made his first appearance at ChUC last month. I was so proud for him and so sad I missed it, but I had to work out, because I'm better now, but I've been taking my time going back to comedy, because I'm acutely aware of what I might end up doing to myself if I'm not careful about my habits.

When Mike asked for stage time I told him that we couldn't give him any, but if he wanted to come and work for it, I wouldn't let anyone deny him that right. He did. He took it right in the middle of the pack, seriousness-wise, but he loved being AT the show the most of anyone that ever worked on it. 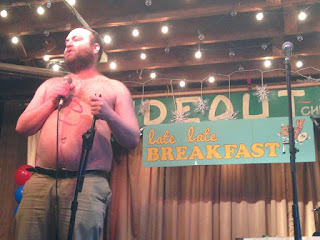 One thing about what everyone else has had to say about Mike today that makes me sad, is that he never really sent me many goofy messages, but I went back through what we did send each other and I think I know why. When we first met and I took him to task for being late to host that showcase, I kind of, and totally on accident, took him under my wing. I'll be the first to admit, it wasn't really that much of a wing. Mostly I would tell him to worry a little more about things like how he dressed on stage and how well prepared his material was, and to worry a lot less about others, like what people might be saying, about him or about us having him on our show. Everything we've all had to say today has confirmed for me one thing, anyone that knew him knows how he took so much to heart.

I can't remember who it was, but someone asked me why we let him do a spot on our show, and I told them exactly what I had told him. Yes, he was new, and he wasn't getting that many laughs yet, but he came in and worked for that spot, and when I saw someone come in and work for what he wanted, I wasn't going to deny him his right just because he wasn't the most polished on stage.

After I had to stop, Mike was the person that kept trying to get me to do comedy the longest. For
months, he would text me every other Thursday or so,

"We'd really love to have you at American Dream."

"I'll love you forever if you come to Blarney Stone tonight."

I'm so glad I made it back one more time to see him.

And I can't think of anything better to do in his honor than go back out tonight. I hope I see as many of you as I can.

First, though, I'm going to go home and work out, because if we're going to keep being there for each other when we need it most, we have to start taking better care of ourselves.

I love you forever, Mike.