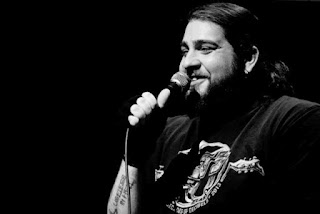 Big Jay Oakerson is one of the most recognizable comedians in New York City if not the country. He's been featured on Comedy Central’s This Is Not Happening with Ari Shaffir,Comedy Underground with Dave Attell, Louie, Inside Amy Schumer, and Late Night with Jimmy Fallon. Jay has two comedy albums: An American Storyteller and The Crowdwork Sessions: What’s Your F@#king Deal!?! He co-hosts two widely popular podcasts: Legion of Skanks and The Sex, Drugs, and Rock & Roll Show. He also co-hosts The Bonfire on Comedy Central Serius XM Radio Mondays & Wednesdays from 6-8PM.

Big Jay is on tour right now with the humongous Oddball Comedy Festival, featuring Aziz Ansari and Amy Schumer. Right before hosting the Redd’s Apple Ale Festival Stage at here in Chicago, Jay was cool enough to take the time to discuss comedy, bad jobs, his creative process, and how he handles hecklers.

You used to be a bouncer. How did you go from a bouncer to a comedian?
Well, I was young and somebody offered me a job driving strippers to bachelor parties. I thought it would be cool to get paid to watch girls get naked, and I could drive them home.

How was it?
It wasn’t that cool because all I would do was go be put into a dangerous situation, and then drive home with girls who really were not into the job. Some had kids in social services, or a really abusive boyfriend who didn’t even know they did this. It was in such disarray.

How do you think it helped with your comedy?
At the end of the day, it sort of became a source of material. Comedy is so rooted in people-watching and observation, and so this really helped me see a slice of life that I may have never had the chance to see. 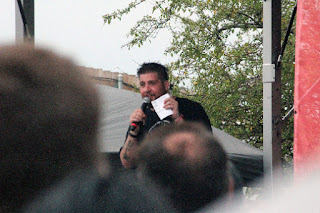 What is your approach to great crowd work? What do you most enjoy about it?
I’d say, being able to observe and then report as best as you can. Crowd work is fun for me because I love the interaction. If I just had to do a scripted set every time, I would get SO bored with myself. I think that starts to reflect on how you tell the jokes. Instead of going up there like, “Hey everyone, how ya doing? So...I was on the subway other day...” It’s better to go up there like, “Yeah, look at this dick head!” or “Who’s this asshole sitting by yourself?” [laughs]

Do you still have a planned set list, or do you just go up there and let it flow?
I know my bits. I have tons of jokes and things that I’ve said over and over again, but overall there’s no real plan. Out of the gates, I’m just gonna go and talk to whoever’s in the front row, and just go from there. 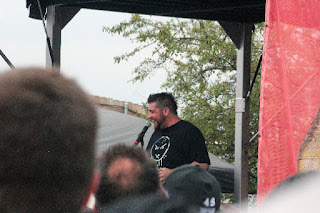 You once went on tour with Korn. What did you learn from that experience?
I was very young in comedy, and at that stage the thing you’re most afraid of is silence in the crowd. So, you maybe try to be a little more gross to get them to “Oooh” or “Ahhh”. But now, I’m not afraid of the silence. The most eloquently way I can put it is: If you “Oooh” and “Ahhh” when I say the word “cunt”, you’re wasting time and you’re gonna miss out on this really great cunt joke that I have. [laughs] I’d rather them pay attention to the substance of what I’m saying. People always get too hung up on the words.

How do you deal with hecklers?
I understand that I open the door for heckling, so I’m very understanding of it as long as there’s no hatred. And, sometimes it’s fun to crack knuckles when someone’s being like, “This sucks! You suck! You’re not funny!” It’s nice to go, “I’m gonna make this guy want to leave.” But that happens rarely. You don’t want to go haywire. I try to just stay mellow, because as long as you stay comfortable, the crowd follows whoever’s most comfortable.