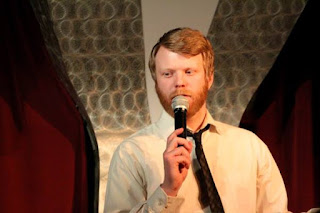 I've ran a lot of shows since I started doing comedy. For the first two years I did stand-up, I lived in an area where if I wanted to get on stage, I had to put together a show. I then moved to bigger area (Chicago) where multiple shows are happening each night. Most of time during these different points in doing comedy, I'd immediately begin running shows with nearly any venue that'd be "willing to give comedy a try". Some of the shows I helped produce, I'm very proud of. Other shows I helped produce, I wish I could use that memory erase thing from Men in Black to make my poor friends who attended those shows forget they ever witnessed that shit. Nothing is cooler than taking a risk and pursuing a dream. Nothing is more embarrassing than taking that risk, and falling on your face in front of people who were in your life before you decided to chase your dreams for 9 to 36 months.

If I'm being honest, there were several shows I helped produce where I didn't put the effort in as a producer. Those shows all have something in common, and that is that they all no longer exist. Sometimes you don't put in the effort right away, other times you wait till you get comfortable (maybe like 6 months to a year into running the show) and then decide to say 'fuck it' and nowTuesday (or whatever school night your show is on) is just the night you get drunk for free and do crowd work for 11 minutes to the 6 people who attended your show. 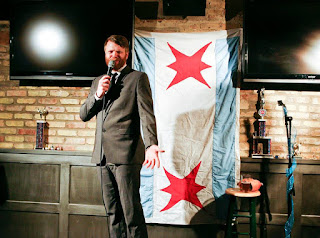 I think one of the things that holds back comedians the most is that we try to view our failures comedically, so when you're running a terrible show, instead of being so embarrassed you want move back to your hometown and start selling insurance, you end up sitting in the back of the room, laughing and joking about how terrible your show is with fellow producers and comedians (or worse lying about how "last week it was packed"), while you try to use as much of the show's bar tab as you can before you tell the 7 people who actually showed up to your show that you're sorry, but we're so bad at producing a show we're totally comfortable canceling our own show, thus admitting the thing we are creating has no demand and is likely a giant fucking failure.

Side note: It's okay to cancel shows. If there are more comedians than audience members at your show, you're wasting people's time. People will forgive you for not being funny, they won't forgive you for wasting their time. 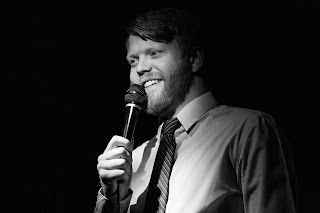 The problem really begins when you're not embarrassed to run a show that 4 people came to last week. The problem continues when it doesn't bother you, and you just keep doing the same 1 social media post a week promoting the show and spend a whole 10 minutes setting up the room by plugging in a microphone and asking the bar tender, "if it's okay to turn off the tvs?". Stop thinking that making a post on Facebook or Twitter 45 minutes before the show starts is putting in any kind of effort whatsoever. Stop being okay with the fact that you're doing so little work for the show that you can show up 5 minutes before it starts and be fine. You think no one is noticing you being a part of shitty thing because last week you posted a picture of your friend Jimmy who's been doing comedy for 14 months "killing it" and it got 22 likes on Facebook. He's not. You're lying. You're both trying to shine up a piece of shit, by pretending that it's anything but a piece of shit. 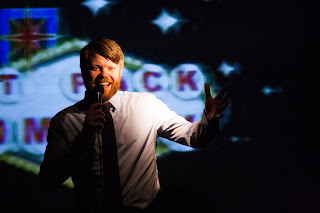 When I think about producers of independent shows that give a shit, they aren't afraid to really push their own show, because they know they're putting the effort and work into producing something that people are going to want to attend. Not just once either, something they'll want to come out to regularly and tell their friends. How cool is that? You can have make something that people are actually interested in and all you have to do is have a little pride in yourself.

I'm not going to list all the things you need to do to run a perfect show. There are plenty of articles that already do that, and honestly, if you want to see it in person, just go attend one of the shows that's been around for several years and you and other comics are mad that you aren't getting booked for. Chances are they are doing something right, and you can actually see first hand success running a show that could be completely attainable for you, assuming you're going to give a shit.

With all that being said, you should come see a show at the Nation's longest running independently ran comedy show, The Lincoln Lodge. Holy shit, Kyle. Did you really write that whole article just to plug the show you help produce every Friday at 8PM at Subterranean? Yes, I did, person reading this. Yes, I did. That's how much I give a shit.

Contributing Writer Kyle Scanlan
Living the dream in Chicago, Kyle Scanlan is a comedian/writer/producer, member of the one and only Lincoln Lodge and founder of the funny as hell news satire site The Whiskey Journal.
Newer Post Older Post Home