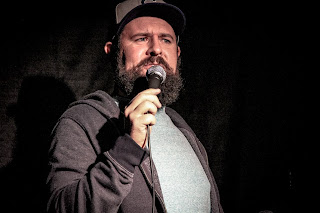 Ricky Gonzalez is a Chicago favorite with a well-earned resume: Co-producer of Comedians You Should Know on Wednesdays, cast member of the great Lincoln Lodge (longest running comedy showcase in America) on Fridays, co-producer of CYSK in Aurora (2 nd Saturday of each month), cast member of the Lincoln Lodge in Hyde Park (Sundays, coming soon). On top of that he teaches a stand up class on Tuesday nights, he’s a pre-school teacher during the day, and during the summer he runs his own summer camp for kids.

His debut album is being recorded all weekend at the notorious Comedians You Should Know venue, Timmothy O’Tooles. His first show is tonight at 8PM and again at 10:30PM, hosted by Danny Kallas. Then, tomorrow’s 8PM & 10:30PM shows are hosted by Jeff Steinbrunner. In this interview, Ricky discusses his days of playing college baseball, preparing for an album, and setting goals in comedy. Enjoy! 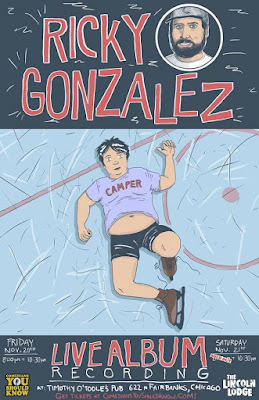 [laughs] I have this conversation all the time. As busy as I am, and of all the commitments I have, it’s actually my favorite thing I do. Because, I’ve taken all kinds of comedy and writing classes, and I didn’t exactly get what I was hoping to out of them. So, my whole thing is: Whatever your expectation is, I want to address it. There are some basics that I think is very helpful for people to learn early on.

How is this class structured?

The class is very intimate, only 5-10 people. And, it’s only 5 weeks long. None of those “Level 2”, “Level 3” continuation type classes that most other places do. The next level is to just go to mics and keep doing what you started doing.

With everything that you run and produce, how do you have time to also perform and have a day job?

It’s very tough. I have been told that I am one of the most organized people that a lot of people know. I embrace Excel documents and utilizing my planner. [laughs] 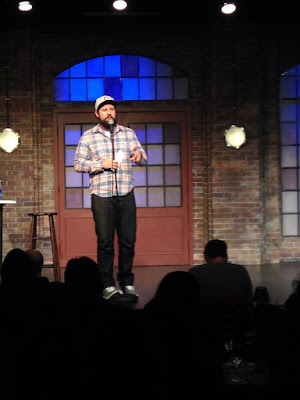 ON RECORDING AN ALBUM

When is the right time to record an album?

The first thing would be, do you have the time? An album should be around 45 minutes, minimum. And not just do you have that much material, but are you excited about it? Do you love it enough to put it together as this culminating artifact to showcase and put on display? If so, then go for it!

For you, how did you know you were ready to record an album?

It wasn’t as much, “Am I ready?” or “Am I not ready?” Because, you’re always going to play that game with yourself. For me, it was more about goal-setting. A year ago, I told myself that in one year, I wanted to record an album. I wanted it to be a good reflection of myself, and of my material at that time.
How helpful was it to set a goal like that for yourself?

It was the healthiest thing I had done for myself, comedically. Instead of worrying or getting jealous about other comics getting things that I wasn’t getting, my main focus was just getting this album ready.

Before comedy, you had a semi-pro baseball career. What was that like?

Baseball was pretty much what I thought I would be doing with my life. I played in college as a left-handed pitcher. I figured the demand for a left-handed pitcher is SO high, that someone might draft me, or I’d play minor league baseball. After college, I played in a league in Chicago and Wisconsin. It was then, that I started taking writing and stand up classes because it hit, that maybe I won’t get drafted. [laughs]

How did you even become interested in comedy & writing after baseball?

It’s SO random, but during my college senior year as I was trying to figure out my life, I took a screenwriting class. And, the teacher just happened to be the guy who wrote Revenge of the Nerds! He taught me how to write and told me I was funny, and he encouraged me to do stuff like that. It was the first time someone had ever told me that I was funny.

What is it about stand that you enjoy more than baseball?

The thing about stand up that I love is that there is no coach who can bench you. If you want to get on stage, you can find a stage. I love that element because nobody can stop you. Sure, people won’t book you for a show, but you can still always find stage time. 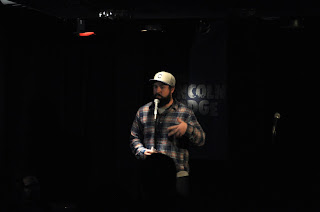 What does “Finding Your Voice” mean to you?

Everyone always says that it takes at least 10 years to find your voice. To me, finding your voice isn’t about finding your character, or your act, it’s more about, “What are you passionate about?” and “Who are you as a performer?”

Should you change up your set or your jokes based on the type of venue/crowd you perform for?

No matter where you are, always just do the jokes that you’re most excited about, and the most passionate about. You will always perform those jokes better than the jokes you feel obligated to tell.

Of all the shows you help produce, what exactly are they looking for? What do comics need to know about getting booked on them?

We would love to get more and more people up who are great. We want to showcase Chicago’s best stand up comics. And, we also want it to be a big, diverse list of comics. We don’t want it to be the same lineup all the time. At the same time, these shows are either once a week, or once a month. And then, the cast gets regular stage time because of the work they put into it. So, our challenge is making tough decisions and agreeing on who we book, because we really can only book a couple new comics a week, out of a list of about 200. We also want the comics who are doing really well in the moment, which is why we don’t book too far into the future. Because, once we arrive at that moment, we’d rather book someone who is really hot, at that time.

I can say a lot of clichés that people say all the time, but the best and healthiest thing that really helped me was making a year long goal to record this album. Now, that doesn’t need to be everyone’s goal. But, I think there should be some type of goal setting. Something tangible to work towards. It could be something like: I want 10 new minutes within the next 3 months. Whatever it is, make a goal for yourself, and just focus on achieving that. When you do that, all the outside negativity won’t drive you crazy anymore. You will push it aside, you’ll be much happier, you’ll be more driven, and you will get better.