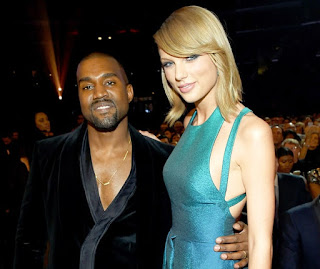 Though not comedy related, this Celeb-drama was good for a chuckle.

Kim Kardashian-West leaked a video online of a conversation between Taylor Swift & Kanye West about a line he wrote in a song that Swift approved of.

However in a grammy acceptance speech T-Swift throws all the shade at Kanye for how some will try to claim responsibility for your success. Which gave this air of: Omg, I’ve never heard of this song before its release.

Which puts that statement in one corner & the truth probably in another room somewhere. Once she was outed, Taylor responded with not approving of being called “That bitch” on IG (That’s Instagram, just FYI.) The line was quote:

Wait, of all the things to be mad about? He thinks he might still jump your bones & her response is: “Well you can have hope about getting all up in this but you don’t have to call me a bitch about it.” Her post on I-gram (Keep up.) was about that. Kanye has a wife & children and still feels he’s going to Jesus Walks into her vagina?

Not to mention as a rapper, you typically want to have beef with the great MC’s of the world right? Jay-Z & Nas, Tupac & Biggie, hell Drake at least beefed with Meek Mill. Kanye you’re beefing with a woman who writes “boy bye” songs for a living. I am not sure how that’s going to end for you Yeezy. In my opinion though this is a heartbreaking story about a love that never came to be. Two people who couldn’t fuck each other, have chosen to constantly fuck each other off.