How Leslie Jones won the internet... 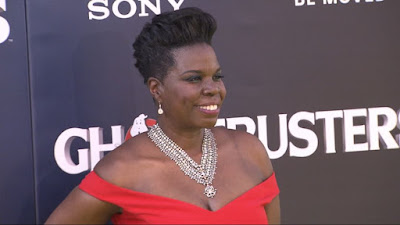 Lets break it down shall we?

1. She shut down her trolls/haters.
Jones has achieved, through hard work & talent, a lot more recognition & fame these days which has also unfortunately  equated to a ton more internet trolls. One in particular is Milo Yiannopoulos, a Blogger for Breitbart who initiated an avalanche of vicious racism on Twitter with with slimeball tweets like "There is no way to justify calling her beautiful. She’s extremely ugly." This opened the floodgates for a barrage of racist & sexist comments focused on her. Instead of quiting Twitter, like some celebrities, Jones maintained her account with dignity and class while expressing dismay at the cruel treatment. Well... the outpouring of support for Jones was unprecedented. Comedians like Amy Schumer and millions of others had her back. So much so that Yiannopoulos had his account deactivated by Twitter. Which was, again, unprecedented.

2.  She pimped the red carpet.
The twitter triumph alone was a pretty big win - but it got better.  Believe it or not Jones couldn’t get anyone to dress her for the Ghostbusters premiere until she tweeted about it. Designer Christian Siriano steped up after Jones took to Twitter to lament that no designers wanted to dress her for the REDCARPET event. Siriano came through and the end product was Hollywood magic.

3. She Tweeted her way into the Olympics.

Jones, who was already mega-tweeting about the games on her own, garnered so much attention from those posts that NBC asked her to join their commentators in Rio. Yep. Jones was invited to the Olympics by executive producer Jim Bell to cover the international sporting event IN PERSON. Not only did she go to Rio and meet all her Olympic idols, but basically KILLED it with some of the best tweets and behind the scene coverage of the entire games.