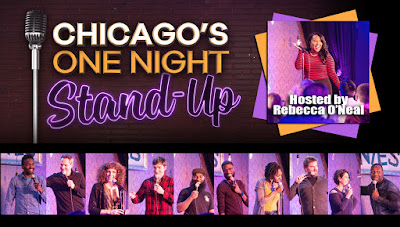 WCIU The U Chicago's One Night Stand-Up!

Prepare yourself to laugh your way into the New Year with Chicago’s One Night Stand-Up hosted by Rebecca O'Neal. This televised comedy showcase will featuring ten of Chicago’s most talented comics performing live at the legendary Zanies comedy club in Rosemont IL. The show will be premiere on New Year's Eve and New Year's Day, so be sure to tune to WCIU

Rebecca O'Neal - Host
Rebecca O'Neal is a Chicago-based stand-up comedian, writer and editor. She has also opened for SNL's Sasheer Zamata, Hannibal Buress and many more! O'Neal is a former cast member the Lincoln Lodge and a regular at Laugh Factory Chicago.

Schmitty B.
Schmitty Boudreau is an actor turned comic. He has a natural talent for entertaining and he toured colleges and clubs nationally. His style of comedy is full of quick one-liners and funny truths. He is focused on making it to bigger stages and now, the screen.

Steven Haas
Steven Haas is a stand-up comedian, screenwriter, and author. Steven's brand of comedy is based on his life experiences. He performs across the country at comedy clubs and colleges and is also house MC at Zanies Comedy Club.

Kellye Howard
Kellye Howard is "Chicago's boldest comedian" according to Chicago Sun-Times. She has been featured on Comedy Central, Last Comic Standing, ABC, FOX Laughs, and more. She has recently seen acting in the new series Chicago Justice. She can be seen at Laugh Factory and Second City's twisty team beginning in March 2017.

Michael Issac
Michael Issac has appeared on commercials and co-starring roles on Chicago Fire and Empire. Issac performs stand-up comedy and headlines locally at Zanies Chicago. He has also performed on forty college campuses across the country. This past March, he was awarded the 2016 College Comedian of the Year.

Alex Kumin
Alex Kumin's bold, socially conscious standup tackles hardcore social issues, ranging from gender inequality to thigh chaffing.  She is a cast member of The Lincoln Lodge and has opened for Aparna Nancherla, Jen Kirkman, Kyle Kinane, and Todd Barry, among others. She was recently featured in Timeout Chicago as a comic to watch.

Michael Larimer
Michael Larimer is from the cornfields of Iowa. He has written and acted in numerous films, commercials, pilots, sketch comedy reviews, and plays. His true passion is stand-up comedy. Larimer  strives to produce smart, crazy, original, and highly energetic comedy.

Kristen Lundberg
Kristen Lundberg is a Chicago-based Second City comedian, writer, actor, producer, violinist, and former toy sculptor from Dayton, Ohio. She won an Orchid Award in Cincinnati for best comedic actress. Lundberg has completed both the Second City writing and conservatory programs. She was recently named one of Chicago's "Comedians You Should Know".

Pat McGann
Pat McGann is a stand up comedian and television host from Chicago. In 2015, he made his second appearance on "The Late Show with David Letterman." Pat created and hosted the Emmy-nominated television show The Chicago Stand Up Project. He has been heard on "The Bob & Tom Show" as well as seen on AXS-TV's "Gotham Comedy Live." His debut comedy album "Sounds Good" can be heard on Sirius/XM radio.

Martin Morrow
Martin Morrow is originally from Birmingham, AL where he began his start in comedy. He is an actor on The Second City Mainstage in their current 105th revue. He has worked clubs, colleges, and festivals all over the country and with some of the top names including Tim Allen, Amy Schumer, and Katt Williams. Morrow is a producer of "Comedians You Should Know" and has been featured on "NBC's Last Comic Standing," The Huffington Post, and more.

T. Murph
T. Murph is an internationally known comedian who has been featured on nationally syndicated shows such as Chicago Fire, Comedy Centrals Key & Peele, and the 2014 ReBoot of BET ComicView. You can catch Murph producing his own show FADED by T. Murph every third Saturday of the month in Chicago.