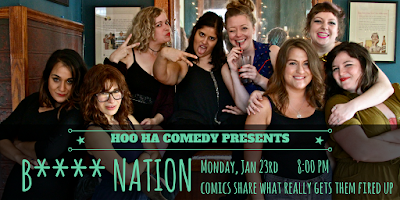 Hoo Ha Comedy presents B**** Nation at Laugh Factory Chicago!
Hoo Ha Comedy is an all-female comedy group that has been going strong for four years. They host shows across Chicago and performs throughout the country and are bringing to you, B**** Nation, an all-female show that features the best comedians in city. These comics put on a bold and strong performance that will leave you laughing for days to come! Watch them discuss their pet peeves and annoyances on stage. Hoo Ha was named by the Red Eye and The Reader as one of the best shows in Chicago and TimeOut declared it "Best Show to See."

To purchase tickets or get more information, click here: Laugh Factory Chicago or call at 773-327-3175