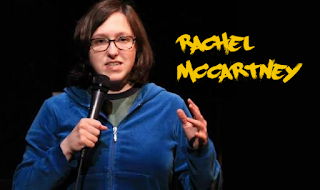 Comedian Rachel McCartney was raised in the near Chicago suburbs and has been telling jokes in the city for over 4 years. She's a staple of the Chicago comedy community and has become a comedian & fan favorite alike. Alas, she is leaving us. But not before headlining one of the shows where she started: Queer Comedy at Zanies. In 2014, McCartney performed in the the Queer Comedy New Faces showcase and has been a returning feature ever since. On Tuesday March 28th, McCartney headlines in a farewell show before moving to New York City. To talk about coming up in Chicago comedy and her bittersweet farewell, I asked her some questions.

Adam Guerino: You're leaving us! Why? Why??

Rachel McCartney: Now-or-never roommate deal. Honestly, I would have loved to stay in Chicago another year. But I'm hoping that even though I'll be doing shorter and fewer showcase sets in New York, the pressure will force me to keep growing as a comic. The level of talent is insane out there and I'm kind of looking forward to stressing out over 8 minutes again.

AG: What was it like getting started in comedy in Chicago? 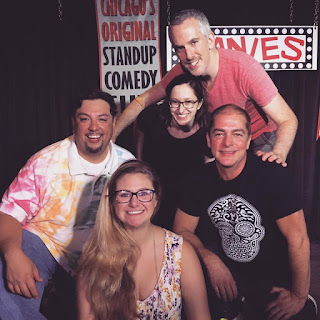 RM: Really, really hard for the first 6-8 months. Didn't help that I was terrible. Then really, really
hard again around the 1.5-2ish year mark - there's this long plateau no one tells you about after you've "lucked" upon your first ten minutes. They feel like a fluke and you're terrified you'll never write anything good again. But you sit with that terror and you write absolute garbage for six months and then you FINALLY have another good idea, and with it, some working version of a voice. I heard about this for the first time on a podcast about a month after I broke through it - if only I could have sent the link back through time, it might have reduced my thoughts about quitting by 4 or 5%.

In between those periods, I got to do Queer Comedy at Zanies for the first time and it made me feel like such a star that I was kind of OK with getting fired from my (awful) job the next week. So there's grandiosity there, too.

AG: What's funny to you? 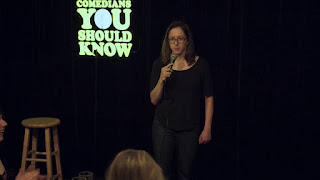 AG: Who's making you laugh lately?

RM: Well, related to the above, Bobby Budds has had several one-liners where I see it on Facebook or at a mic, and then over the next month, remember it randomly and laugh until I'm nearly incapacitated. My sister does a thing where she mocks the way I ate a Snickers once and my reaction is similar. But my own comedy is usually about serious subjects, just because I am personally darker than I am fun. So, Drew Michael for that side.

AG: What has been your favorite audience interaction off stage so far?

RM: A random bro at a comedy club turned to me and asked if I was going up next, I said yes, and he said, "Don't worry, you got this," like he was soothing a toddler before a ballet recital. So I said, "Yeah, I know," he went, "Pff. Well then!", and then I went up and killed. OK, I did pretty well. But it would have been horrible to bomb at that point and I didn't!

AG: What about favorite audience interactions on stage?

RM: Don't talk to me on stage. You will not end up getting a shout out in an interview later. This is me starving the heckler beast of the attention it craves. (I know hecklers are all personal fans of mine who re-Google me before they act.)

AG: Like with any good exit interview, I have to ask--any parting words for Chicago and the Chicago comedy community?

RM: Chicago: I will miss your non-slanted streets and reliable grid system. Chicago comedy community: Thanks for the diversity bookings.

On the notion of parting words: My family lives in Rogers Park, so excepting premature death I'll be back to visit semi-frequently. Can't get too sentimental.

AG: You're not only headlining your farewell Queer Comedy at Zanies show but helped book the line-up. What can we expect from the show?

RM: You're going to see Adam Guerino host, me and a bunch of my favorite comics. And even if you don't like me, you're gonna like my taste in comics. It's frankly impeccable.