Fuck You Pay Me 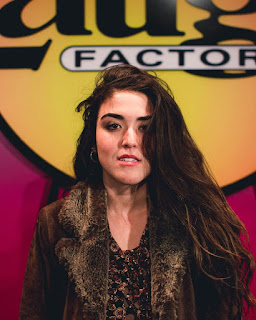 Being new-ish to stand-up, I try to take every opportunity and job I have been offered. Payment is sparse in stand-up, if I’m lucky I’ll get a drink ticket, audience donations, a hug, anything- I’ll take it. Nonetheless, being a broke college student doesn’t help in this whole ‘following my dreams’ thing. My wallet is so thin my ventra pass swipes before I even get to the turnstile. So, when I was offered a hosting gig that paid $100 a night plus free drinks I obviously said yes and then called my mom to tell her I had made it.

It wasn’t even comedy, it was hosting bingo, but I didn’t care; I would host an eating competition at a bowling alley if it paid $100 a night. I went the first night and had a great time, it was essentially three hours of fucking with a drunk crowd who laughed at anything me or my co-host said. The following week when I arrived I met the owner. He was a stocky old guy who looked like an extra in Wolf of Wall Street. He handed my male co-host $100 cash, then he looked me up and down and promptly said, “I hear you’re OK with just drinking for free.”

My initial reaction was a series of guttural noises while my face turned a deep shade of red like I was Violet Bearegarde turning into an angry blueberry in Charlie and The Chocolate Factory. I didn’t say anything. I spent all week agonizing over it. My cohost told me it was paid? Should I have said something? Of course I should have. I didn’t want to jump to conclusions, but all signs pointed in the direction that this was happening because I was a woman. 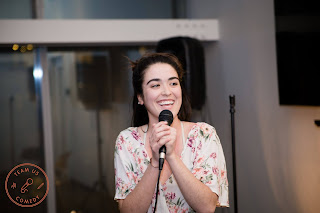 Yes, the comedy and entertainment community and industry is heavily male dominated. As a woman, it can be intimidating at times, but I have had an overall positive experience with the men around me. I have never been made to feel any less valuable or important, until this moment. After many pep talks in front of the mirror I was determined to confront him at my next shift. I was baffled at the anxiety I was feeling over confronting him. If it had been a friend experiencing this situation I would have told them to quit on the spot, demand payment and take a steaming shit in the middle of the establishment. I am a chronic advice giver who can’t take her own.

When I finally asked for payment the following week he asked me, “Why do you deserve to get paid?”

“Because everyone else is.” Which I was only able to muster out in my Mom-who-takes-her-sons-adderall high pitched phone voice. ‘Everyone’ being three men. ` I half expected him to assign me a 500 word essay on why I deserved to be treated equally to ‘the boys.’ He agreed to pay me half of what they were getting, and promised the full payment if I was able to bring 5 people in. I was so overwhelmed I agreed, worked one more shift, and then quit. 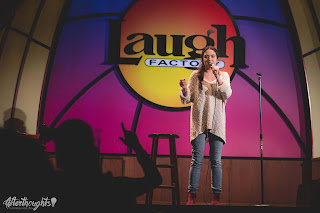 The most concerning part of this situation for me was the amount of hesitation and guilt I felt for asking for the equal pay. There was a part of me that felt like maybe he was in the right and I was overreacting, and that is the biggest problem.

It is not surprising or new to experience misogyny or inequity to men in the entertainment industry, what is surprising is my inability to stick up for myself. Why? Maybe because society has ingrained in women that having a strong voice and standing up to “The Man,” makes you bitchy and intimidating.

Even though I eventually spoke my mind I was cautious and overly nice in my approach. I am disappointed in myself, but also feel liberated in the opportunity to learn how I should handle these real-life scenarios which I will inevitably experience again. I’m not a ‘cute girl’ that is going to work for free drinks. I fart and have to pluck pubes out of my nipples, I am a woman who demands the respect of my peers and authority regardless of vulva.