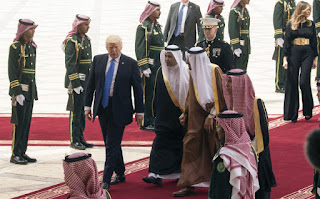 First I would like to thank Comedy of Chicago for letting me give you guys something different than the usual with this piece. It'll be fun, promise.

President Trump traveled across the world and landed in cognitive dissonance central.

He met with Saudi Arabian King to open an anti-extremist center.

In Saudi Arabia. That's right, a goverment arguably responsible for much of Americas past and current terrorist issues - opened a center on anti-extremism.

A center to combat extremist ideology. They have churches already. They have scientific journals about it. Only two megalomaniacs would think opening one building in a country suppressing women harder than republicans would do this. Or forty I don't know.

Yet here we are, old dudes proclaiming to fight the idea of terror. Like kids playing in a backyard taking on the spaceships in the sky right before lunch. 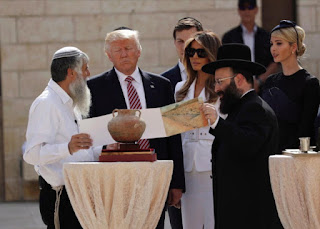 They put all their hands on that mind melding orb, or globe. Whatever, this is only phase one of Project Desert Cheeto. After that incredibly dark and ominous photo you know they waited for the return of The Dark One. He just stood around aimlessly like: You promised us we'd see him. I came all the way from D.C. I literally dragged Melania here, it was great. She was in the 24k bathroom, the best bathroom, hiding behind Ivanka who looked great. You told me to just touch this light bulb and he'd show. Just believe a little harder next time Donny.

Government Cheese ( It's what I call #45) didn't just come to resurrect the Bringer of Death, he came with a tank full of cash to give to the Saudi Arabian King for...tanks. 110 billion dollars for arms on the same day you open a center against extremism.

If you missed the irony, well the air in the land of cognitive dissonance is pretty thick.

Get out while you still can.

Contributing Writer Matt Bright
Matt is a writer, musician and DJ. He was a writer for 5 years with Our Neighborhood Times and is now a content creator for Maash Media and host of MaashBoard Sessions.
Newer Post Older Post Home