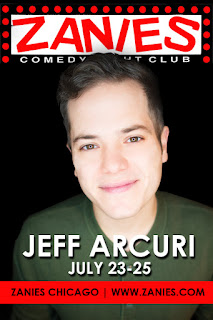 Comedian Jeff Arcuri will be performing at Zanies in Chicago July 23rd - 25th. His unique observations of an everyday man are not only witty but by far the most hilarious shit you'll ever hear. He is often seen headlining in the city. The Chicago Tribune calls Jeff Arcuri “a joke machine.”

After coming to Chicago in 2012, Jeff became a regular at The Laugh Factory, The Comedy Bar, and Zanies Comedy Clubs. He has made an appearance on Laughs on Fox and seen performing at comedy festivals around the country. He is also a producer/creator/host of This Week’s Show. He is a must see, so be sure to catch him at Zanie's Chicago while you can.