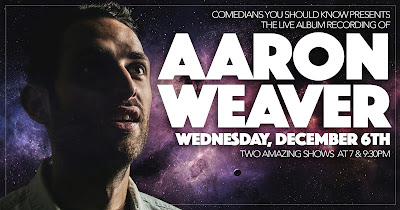 Comedian Aaron Weaver will be recording his comedy album live Wednesday, Dec 6th. Come see this killer as he headlines two stand-up comedy shows back to back in the Comedians You Should Know showroom.

Weaver is no stranger to the best stages in Chicago such as Laugh Factory, Zanies and the Lincoln Lodge. He's been featured on Comedy Central’s “Comics to Watch,” “Last Comic Standing,”and the Just For Laughs Festival.

TICKETS:
$5 in advance & $10 at the door. Purchase tickets here: aaronweaverrecording.brownpapertickets.com

MORE INFORMATION:
General admission | Must be 21+ | Afterparty to follow
Drinks available before, during, and after the show
Street parking available; parking in lot on SE corner of Erie and
Fairbanks $10 with validation, available at O’Toole's
For even more info please email at weavercomedy@gmail.com
Newer Post Older Post Home