Mona Aburmishan is a Chicago based stand-up comedian & producer who performs at comedy shows, competitions and clubs all around the world. In addition to comedy, Mona is a sought-after speaker on various socio-political topics in the United States and the Middle East.

Not only does Mona have a Master’s in International Development, is fluent in English, German and Arabic, she was also the first Arab and Muslim woman to perform stand up comedy at Carnegie Hall in New York and The Kennedy center in DC.

Mona maintains her love for Chicago by running her own stand up comedy and showcase called The Comedy Bowl.

Recently Mona traveled to to Dubai to record a brand new Comedy Central special. She was nice enough to take time out of her busy schedule for a brief interview via email.

Comedy of Chicago:
You recently traveled Dubai to Perform as part of a Comedy Central Production - what was
that experience like?

Mona Aburmishan:
Performing for Comedy Central in Dubai was amazing. Landing at the airport and being met by
driver with my name on a sign under the words “Comedy Central” was like every comedian’s dream. I had never been to Dubai so the city alone was its own amazing adventure. I’ve been told Dubai injects its clouds so it’ll rain more…that’s some futuristic shit! The city was the perfect backdrop for the live taping of Comedy Central’s Season 2 of their series “Stand up Al Waggif.” Which actually in Arabic means, “Stand up, Stand Up!” I was asked to perform two sets, with a quick costume change in between, so I can be included in their 3rd Season as well. The evening I landed they were taping an all Arabic Language episode and I was invited to watch. The Comedy Central production and crew were so amazing to watch, probably because everything was in Arabic and English. Most of the producers were from all over the world, Brits, Tunisians, Lebanese, Swedish, and even Americans. Most were women, while the sound and cameramen were men. I loved being able to watch them filming a show two nights before I was scheduled to appear so I could get a clear understanding of the set and layout.

The experience of performing on a Comedy Central live taping was a weird combination of emotions that often felt nerve wracking, euphoric and just another day at the office. The day of the taping I had to be on set by 2PM when the taping wasn’t until 8PM. The early call time was for the comedians to film the promotional and social media footage.  There was a lot of “hurry up and wait” but chilling and talking shit with the other comics and crew made it feel like I was being paid to have fun and kinda felt euphoric.

Then it was show time. Each comic got 7 minutes. The stage was set up to look like outside a New York style brick wall comedy club, with busted windows but I think the set designers got really excited and went more for Chicago meets Gaza vibe. That made me feel right at home. I was the only female on the line up, and I was both the opener and closer My nerves calmed, I smiled and remembered I only do this for the people and then my name was called “Ladies and Gentlemen, all the way from CHICAGO, Mona Aburmishan!” 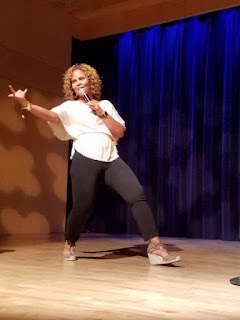 MA:
I killed that motherfucking stage! Damn, every joke hit harder and sweeter than I had hoped for the days leading up to that moment. I switched between Arabic and English in my set ups and punchlines. My 7 minutes went perfectly. I got off stage and the guys back stage where jumping in the air cheering for me. I stayed looking down and kept repeating, “that’s what’s up, that’s what’s up, that’s what’s up” like I was a rapper in a trance. Then I looked at all the guys cheering me on and wished more women could see and feel the level of male support around me right now. I thanked everyone and really took in the camaraderie with deep gratitude for being able to live out my dream. And audience feedback was AMAZING! Because it was Dubai, and the show predominantly in English the audience was comprised of expats from all over the world.

COC:
That seem like a one in lifetime type Gig - how did that booking
come about?

MA:
It was pretty simple; I received a FB message from a fellow comic I’d worked with before - he was was working with Comedy Central to produce and book the lineups and he thought I'd be a great addition to the show. I try to never ever take anything for granted, most of my opportunities have come through just a genuine authentic connection with someone. Also, I try to never worry too much when I get screwed out of money; the universe usually sends it back to me three fold. Which is exactly what happened in the Dubai case. 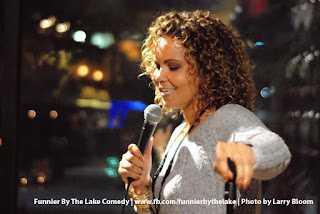 COC:
You have also performed comedy in West Bank - what are some major
differences between American and middle eastern audiences?

MA:
Yes I did perform throughout the West Bank and the one major difference is the Palestinian Audiences are hungrier for conventional American/British style stand up. They watch YouTube like crazy and can literally quote famous comedians. So when a comedy show comes through town and the comedians are ethnically and religiously similar to them, they were beyond excited. Even the American comedians on tour with me that weren’t Arab had a HUGE impact on the audience because they finally felt heard. Palestinians know their story but for 90 minutes they really love to laugh at someone else’s.

COC:
As a female Arab & Muslim American comedian, what are some misconceptions that you have to address from audiences members. Bookers and other comics.

MA:
So far my being a Arab & Muslim female comedian has always allowed me to feel as though I stood out in a lineup and if anything I’m a preferred outlier at times. On a comedy show line up of “white guy, white guy, black guy, black guy” being a woman, let alone an Arab Muslim woman is a nice break. However, just like any comedian my perspective on what I want to share and what I don’t does shape my branding and really isn’t conventional. For example I don’t talk about the same things other females are talking about on stage right now, which at times can make me feel less appreciated and connected. With some of my material coming from a global perspective, with me having lived in Europe, the Middle East and Africa, I often put a great deal of pressure on myself to somehow speak my truth while trying fit the mold while not actually feeling understood or appreciated at all. However, when I am, it feels more rewarding than anything else. 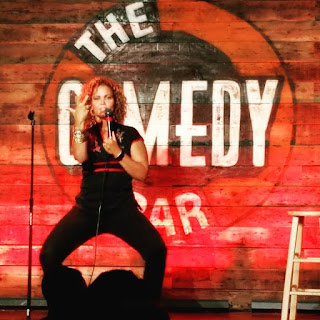 On the other hand, performing for Palestinian and/or Arab American audiences in general is rather tricky, and not just because all Arabs think they can do your job better than you can. But, there’s a fine line I balance to both have an impact on the Arab audience by pushing the envelope on things we need to discuss - as well as being respected as an independent female business owner and performer.
Outside of the Arab audience, me being an Arab/Muslim is a draw. Americans want to hear from Arab/Muslim comics, especially the female ones. That’s why there are successful Arab Comedy Festivals around the world as well as Arab/Middle East themed showcases in almost every American comedy city. Comedy has always been our way of therapy. With that, I’ve noticed far more than not, Americas wants to hear that a thick Arab Muslim Chick who really looks Puerto Rican has to say.

Lastly and most importantly, I noticed that my being a Palestinian female comedian didn’t matter as much as I thought it would. The audience loved and connected with me being a Palestinian but didn’t care that I was a female and that confused me. While doing shows there I asked my father who happened to be in Ramallah for the shows, “Why is no one, not the press or audience, making a big deal about me being the only female on this tour?” he replied “You’re a Palestinian woman, we always expect our women to be outgoing, driven and can do anything.” At that moment, in Palestine, I realized my idea of what it means to be an Arab/Muslim woman was based on what American society and media had made me believe.

Therefore, how I carry myself on stage for audiences and bookers is of my own creation, whether I’m Arab, Muslim or a green Muppet; so long as I’m funny and make the audience laugh and don’t go over my time.