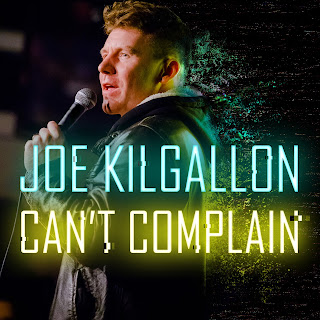 One of Chicago's favorite comedians, Joe Kilgallon released “Can’t Complain” on Thursday, June 20th & Within 16 hours of release it reached #1 on iTunes

This album was cultivated through Joe's stage work over the past two years since Joe became a father. In preparation for the album release Joe collaborated with James Webb in the production and mastering of the final product. Webb is known from his work as a podcast producer for several Chicago comedians when he launched his YouTube channel and Facebook page "People of Comedy".

Once you have committed to producing a special, next comes the arduous process of refining your material and mastering your set. It is important to have a series of shows or at the very least a network of show producers that will provide you time to work over your material.

When asked which shows are best for formalizing material for his special - Joe responded “My favorite spots around town to work material out was Comedians You Should Know, Comedy Cocktails at House of Blues, Laugh Factory, The Improv, and Zanies - So many great spots in this town right now. I think we're only seeing the tip of what Chicago comedy can and will be”.

To hear more from Joe Kilgallon check out the Kilgallon’s Pub Podcast or Joes website.