Side Mullett Nation at The Comedy Bar 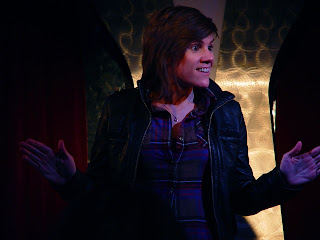 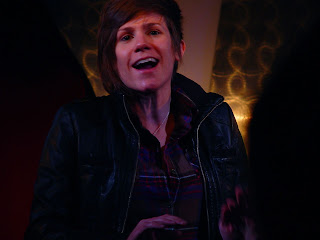 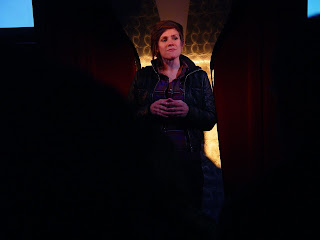 Since I've been hearing so much press about it, I decided to check out Cameron Esposito's show "Side Mullet Nation" which is currently running every Thursday night through December 15th at The Comedy Bar Comedy Club, which if you have not been is a great venue for comedy.

Wasn't sure quite what to expect since it's been described as sort of a one woman "storytelling" show and I know Cameron mostly from her stand up routines which I've always liked.  Andrew Halter and Liza Treyger, both solid stand ups in their own right, were also on the bill.  Now I'll just come out and say it, I've never been much of a fan of live storytelling or poetry slams or performance art for that matter.

No judgment, just not for me, you know? Never something I sought out or was ever blown away by.  Not that I haven't tried, believe it or not I've been to my fair share of poetry slam performances and I have always hated it.  The posturing, the over enunciation of words that are only meaningfully to the poet, ugh... I'm a comedy fan, I like my performance art to be funny, that's just me.

So it was with slight concern I went to the show.  Well, my concern was for naught because Side Mullet Nation is a hell of a great show.  It's funny, has a quick pace and Esposito has a knack for telling stories in the manner a great comedians like George Carlin.  She tells tight engaging little snippets of her life that are hilarious yet intimately personal about family, coming out and relationships.  But told in such a conversational tone that everyone felt (or at least I did) like we were just chilling out in her living room with several close friends drinking some wine and shooting the shit.

Esposito's charm and quick wit enamored the audience through some minor technical difficulties that seemed to plague the show through out the night.  The talented Liza Treyger and Andrew Halter also performed stories and they did not suck at all, matter of fact I was quite impressed and I'm told there are new guests each week.  All and all a solid show which I recommend before the run is over.  Quick note, as I said there were some technical issues with the sound (there was none) for most of the show, but to the credit of The Comedy Bar management team, they gave out FREE passes to the ENTIRE audience.  Which was very nice since most venues are like "oh well, tough luck" when that type of shit happens, so kudos to The Comedy Bar for being a class act.