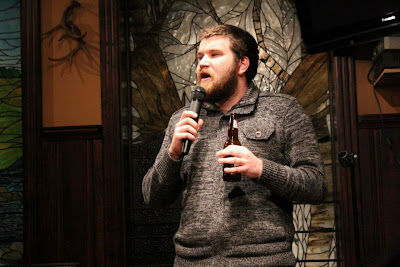 "Every culture has it's rites of passage that signify a fundamental change in a person. They exist to serve as landmarks in an individual's evolution; the ritualized version of a road sign saying "Maturity: just ahead. No gas, 15 miles."

Some cultures use branding, some use ceremonial ingestion of semen. Thankfully things are a little easier for us comedians. You hit up a few open mics, read a snarky blog post about which comics you're supposed to currently hate, and all of a sudden you start to feel a different somehow. Your extremities begin to tingle, and a feeling of omniscience washes over you. You look at yourself in the mirror; you don't look any different, but you know you're not the same. You'll never be the same, no, because you have successfully made the transition from civilian to comic.

Congratulations! You've heard The Great Calling of The Comedian, the drive to tell truth to power, to destroy tyranny with queef jokes. There's no longer any doubt about what you're going to do and who you're going to be; now you can enjoy the rest of your life just minding your business, working on your act and moving forward.

But no, you would be so lucky if it were that easy. You have seen the light, but like the archetypical philosopher from Plato's Allegory of the Cave, you know that it's your duty to double back and help free your former fellow prisoners, those sad comics and could-be comics who can't figure shit out on their own. That's a shadow puppet, you silly goose! The real puppet's outside!

But what can you do? Start an open mic and run it well to create a nurturing environment where people can get comfortable working out material and growing as performers? Eh. That sounds like a lot of work, and as we all know, running an open mic is for suckers. Sitting through 30-plus performers not named Me? No, thank you.

That really just leaves two choices: give up on your noble calling, or write an advice column for new comics on a loosely edited local comedy blog. I think we both know which road you're taking.

Congratulations again! You're a hell of a trooper to be so undaunted on your quest. A lesser human being would surely have quit by now if faced with such a daunting task as distilling all the wisdom and insight you have about doing stand up comedy into cogent, helpful advice. It would be easier to start with the Encyclopedia Britanica and end up with a concise description of what root beer tastes like. But fear not! Follow my advice, and your advice column will be reposted and retweeted like it was a racist comment made by a celebrity. 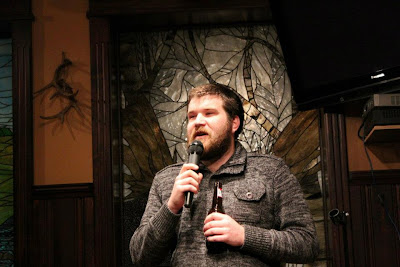 1) Strive to maintain an attitude of polite condescension, but (and this is very important) never, ever explain what qualifies you to give advice to anyone. This is crucial, because as long as you don't mention anything about your list of credits, you'll be safe from straw-man attacks about how you don't have any credits.

2) Make everything sound like its supposed to be a joke, but resist the urge to actually write anything funny. Sure, you could be hilarious if you wanted to, but this isn't about you, this is about all those poor new comics you're selflessly helping. The last thing you want to do is intimidate them with your finely toned, rippling joke muscles.

3) Stick to the script. Go with the greatest hits, if you will. Let's just say there's a reason that every "new comic advice column" includes "write a lot and prepare," "pay attention to the light," "don't beat yourself up if you bomb (it happens to all of us!)," and "most importantly, have fun!" There is no reason for you to try and get fancy and give out risky advice like "go ahead and take an improv or sketch writing class," "apply to intern at a showcase, or even start your own, because why the fuck not" or "email that guy at SoHa, they let anyone on stage and you can pretend it's a real showcase." You don't know exactly who your audience is, and you can't possibly trust them to respond appropriately to such rangey advice. Best to stick to the road most traveled.

4) Include at least one piece of paradoxical advice like "even a worthless open mic is worth doing." The inherent contradiction will make the reader think, mostly about how deep you are.

5) Be prepared for all the bookings that are about to come your way. The higher-ups, the bookers and show-runners will undoubtedly take notice of how much you're helping the local scene, and they will be quick to repay the favor by getting you on stage as much as possible. Take it slow, enjoy the experience, and use everything you learn for your epic sequel, the "Advice For New Headliners" column.

If you do all this, you are sure to succeed. I'll see you at the top; the top of the "advice column writing game," that is."