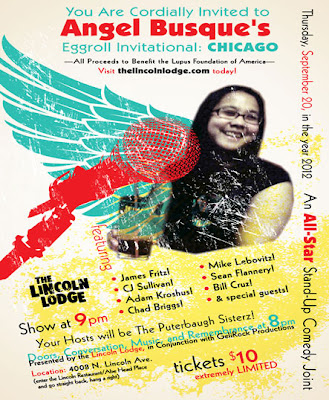 Well September is upon us and it's my favorite time of year. The weather is slightly cooler, the air is crisp and fresh with the reminder of fall and football. Currently Chicago is as beautiful as it gets. It's a great week to get out and laugh with plenty of affordable options all over the city. Part of our goal as a comprehensive comedy blog about the Chicago stand up scene is to help bring awareness to shows that deserve it.  In the spirit of that sentiment we have listed a couple of items which are fundraising events including a special benefit happening Sept 20th @ The Lincoln Lodge with an insane lineup of comics. So with out further ado, check out what's popping for the next couple of weeks.

Heard good things about this twice a month, Monday night, open mic which is smack dab in Bucktown.
Tonight!/Sept 10th

The Comedy Evening Presents: Defining Sharp with Joe Kilgallon
@ The Ace Bar
This showcase has been kicking ass and taking names... get there early if u can...
Tonight!/Sept 10th

SLAM Premiere Party
@Haymarket Pub & Brewery
9/17, Don't know much about this other then two of the best, Mike Lebovitz and Junior Stopka are scheduled to perform which is good enough for me.

The Chicago Moth grand SLAM @ Park West!
@ Park West
Two events on 9/10 and 917
OK... so technically this is a "poetry slam" event... but since I find that shit hilarious and the Park West is a great place to puke on yuppies... we recommend it... and oh yeah funnyman/afrohipster Brian Babylon is hosting.

Senorita Weiner's Top Secret Humor Experiment and Ice Cream Social Club!
9/21, Very weird but funny as hell, great ice cream! One of those shows that has to be experienced to be understood. From the dark and twisted mind of Junior Stopka among others.

Feztival
@ Dank Haus
9/22, A fundraising event to support the Feminine Comique and the Lincoln Lodge.