Aaron Weaver: Doing It His Way... 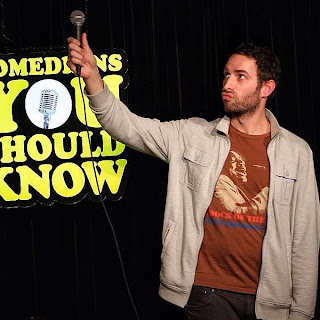 Aaron Weaver will scare you when he's on stage. Not in a creepy, scum bag way, but in a sudden, fiercely genuine"holy shit that's funny" manner that your brain is slightly unprepared for. Aaron's brand of humor sneaks up with a serial killers quickness and slays any preconceived notions that your mind tries to cook up based on his unique delivery.

You see, Aaron performs in a distinct character which is apparent to any one who talks with him off stage for more then 30 seconds (which you should do, because he's a super friendly, intelligent guy). Now you might be thinking... "Yeah so what? All comedians are playing characters to some extent right?" Well... on stage Aaron sounds a like a special needs hillbilly, that was raised in a inner city ghetto that teaches a community college philosophy class.

Your inner dialogue goes like this when he performs: "Damn does he really talk like that? Where the fuck is this guy from?" Quickly followed by the holy shit moment mentioned earlier that initiates fits of sincere laughter. By the time he drops his cheese sandwich metaphor bit, you will stop fighting with your minds desire to put his style into a box, and just be like "fuck it" and just let the funny roll over you.

Case in point. I caught Aaron performing at a packed house at the Comedians You Should Know showcase in downtown Chicago at Timothy O'Tooles. How did he do? The guy killed it. Straight rock star comic shit. The crowded table of folks sitting next to me, who looked a little confused when Aaron started, were howling with laughter by the time he finished. And that's how the man does it, he sneaks up on you with an unorthodox style, then snaps your neck with a comedic Kung Fu chop to the spine. 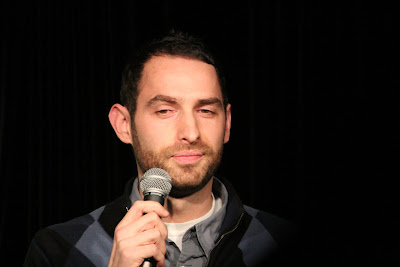 Aaron can be found in Chicago doing his thing at all the best comedy venues such as Zanies, Laugh Factory, Lincoln Lodge, The Comedy Bar Club and everywhere in between. In just a few years, his weird but charming persona plus a whole lot of freaking hard work has slowly thrust him into the limelight of the Chicago comedy scene. His TBS Just For Laughs website bio says this about him.  "Having been described as "weird but repeatable," "urban and country," and "deadpan with energy," Aaron is constantly fusing opposing elements to create what many simply call "a breath of fresh air."

I just call him funny, you can peep one of his video clips here... And oh yeah, it looks like Aaron will be moving to L.A. soon, so be quick to catch him at a showcase near you.