Are You A Comedy Pig? - By: Dobie Maxwell

My grandfather was by far the single biggest positive influence of my entire childhood. I freely admit that if it weren’t for him and his time tested wisdom, chances are sky high I would be dead or in federal prison by now. Even with all of his guidance, I still almost ended up both of those. Gramps had an amazing gift of cutting through extemporaneous fluff and getting straight to the point on any topic. He had a vast storehouse of clever little sayings, rhymes and bromides socked away in the filing cabinet of his brain and he’d whip one out whenever any situation called for it.

One of many I’ll never forget is: “The difference between involvement and commitment is like the difference between bacon and eggs. The chicken was involved - but the pig was committed.”
Are you only just involved in stand-up comedy, or are you totally committed? If comedy were a prison sentence, would you be looking to get off on a technicality, or would you be a lifer having no chance whatsoever of parole? It doesn’t matter which one you are, but you do need to know. 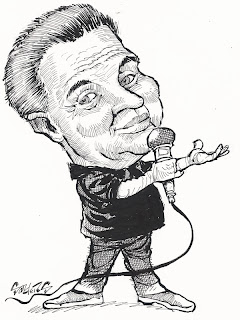 If you aren’t immediately sure, chances are you’re only involved. Again, that’s not a bad thing. Very
few people ever find their true calling in any field. There are precious few who make a long term lifetime commitment to anything - and even then there’s no guarantee at all of their success. Just because someone wants something unfortunately doesn’t mean they’re going to get it. The odds of anyone reaching the tippy top of any profession are beyond astronomical, but that isn’t a reason to avoid an all out attempt at it. It’s just wise to know what one is getting one’s self into.

When I was in high school, I had the good fortune of being a ball boy for the Milwaukee Bucks basketball team. I got an up close opportunity to observe firsthand the behind the scenes lifestyle of the NBA in the 1970s. It was a fantastic education, even though not at all what I had expected. The biggest revelation I had was no matter how big a superstar anyone might be, there is still a human being in the mix somewhere. Nobody is defined by what they do, even though that’s what the public may only recognize. All of us are a lot of things, and nobody is without shortcomings.

One encounter as a ball boy that will stay with me forever was getting a chance to interact one on one with Julius Erving – the biggest star of the day. “Dr. J” was the man, and I had the chance to talk to him in the locker room one night before a game. He couldn’t have been any friendlier. He told me he loved playing basketball so much he would do it for free if he had to, but he was not about to make that information public. He said if anyone can do that in life, nothing else will matter. I never forgot that moment, and I think he’s absolutely correct. Dr. J was a basketball pig, and I mean that in a very positive way. I am a comedy pig. I’m going to do it whether or not they pay me, and once in a while they don’t. What side of this fence are you on? You’re the only one who can answer, but you really do need to know. If you’re in it for life, there’s no turning back.