It's been a minute but it's back - Weekly Top 5!! As always this list is subjective, based on opinions and only covers events we actually went to. So of course, we missed some shit... Feel free to send links to your favorite events. Here are the 5 BEST THINGS that happened last week. 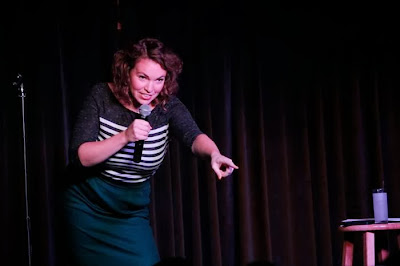 Beth Stelling's week long run at Zanies: Stelling returned to Chicago last Tuesday for a  6 night run at the iconic Zanies comedy club. Was lucky enough to watch her first nights performance where she headlined at the Zanies Queer Comedy show ahead of her concurrent 5 day co-headlining stint with Drew Michael. Bottom line, it was the best show of the week. Looking fantastic, Stelling was relaxed, confident and hilarious. The time in LA has been good to her for sure. Working a crowd of her hard core Chicago fans, Stelling kept them hanging on every word with her special brand of dead pan, self deprecating jokes which belie a razor sharp wit underneath it all. Stelling was #2 on the “12 L.A. Comedy Acts to Watch in 2013” by LA Weekly, was a New Face of Comedy at the Just for Laughs Comedy Festival in Montreal and made her stand-up television debut on TBS’s Conan. Also check our exclusive interview with Beth right after the Zanies show.


New season @ The Lincoln Lodge: Caught a tight ass show at the Lodge last Friday night, which was really an outstanding night of solid local comedy. Marty DeRosa did a his usual bang up job headlining and Kelsie Huff was a great feature. But the true star of the night was the Lincoln Lodge itself. They really know how to put on a strong comedy show booking with the best available local (and national) talent around. Also they run the tightest ship in town. Lighting, sound, seating, staff - all top notch. There is a reason LL is the longest running comedy showcase in Chicago.

Danny Kallas: Kept bumping into this guy every where this week. Open Mics , showcases, hanging out and supporting comics at other shows. Danny does it all. Not only does Danny co-produce Comedians You Should Know, Chicago's premiere showcase, but he's constantly working his art form. Hustling for stage time, writing, getting better. Nobody works harder then this guy and it's always a pleasure to see him out. You can catch danny this Thursday at Stand Up Stand Up, 1540 N Milwaukee Ave, Chicago, Il.

Maggie Sargent of the Laugh Factory. Sargent, (Operations Manager) will be leaving the laugh factory today. She will be missed. Under her tenure, LF Chicago rose from a struggling new club stuck in the beer-soaked shadow of Lakeshore Theater, to a top notch club in its own right that prides itself on supporting and nurturing young talent.  That was all Maggie. She was at every show, watching sets, talking to comics and building relationships. She was around town at showcases and open mics. She was always open to listen to a comic’s new idea, or a staff member’s pitch for a new show. She loved people and she loved creativity. It was those two attributes that not only made her a great club manager, but also a true comedy fan.

Super Fans: The fans of the Chicago comedy scene came out in force this week. Not sure if it was because Halloween was so close or what, but they were out there supporting big time! Open mics, showcases, big shows, little shows. Everywhere. Saw lots of  familiar faces and some new ones too. Comics sometimes forget it's all about real fans not just your open mic drinking buddies... So we wanted to be sure to send some props out to the real folks that come out because they love it, not because a comic friend made them, or they want to support a boyfriend ( or whatever). Super fans support because they love stand-up comedy and they want this scene to succeed as much as the comics do. We should never forget that.