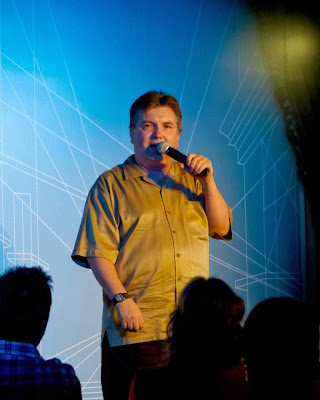 Five minutes doesn’t sound like a significant amount of time, does it? And in the big picture of the cosmos, it isn’t. But there are times when five minutes can seem like an absolute eternity. For example, try standing completely naked in a blizzard or outside the bathroom door of a Mexican restaurant that long. Better yet, try holding your breath five full minutes. It can be a LONG time. In standup comedy, those five ‘short’ minutes can seem even longer than eternity – especially when things aren’t going well. The stage quickly transforms into the land time forgot, with each and every tick of the clock becoming another direct sledge hammer blow to the head. It’s torture.

I’ve been in that horrific situation more times than I care to count. It’s like an exhausted fighter trying to find any way possible to get through the last round when there’s nothing left in the tank. The arms are heavy and the gloves feel like they’re loaded with cement. When WILL a bell ring? Like it or not, if you plan on doing standup comedy for any length of time you will experience the exact same scenario at one time or another and probably a lot more than once. It’s inevitable, just as a baby learning to walk falls down at some point. You’re learning to walk as a comedian, and there will be some rough spots to overcome. They can be far less painful if you are prepared. 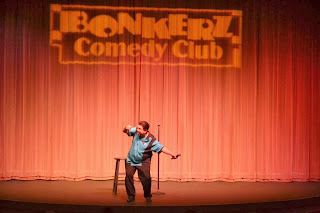 At first, standing on a stage in front of a room full of strangers (or worse yet, other comedians) is unbelievably intimidating. Try as one might, sustaining consistent laughter for that long seems like trying to make love ‘all night long’. It may be the intention, but it’s usually over a lot sooner. Eventually, it gets a little easier (the comedy, not the love making) and it’s not all that difficult to stand on a stage that long and at least appear to know what to do. It might not be a stellar show in every respect, but enough people can be fooled to think an actual comedian is in front of them.

As years progress, so does stage stamina. I remember very clearly when I was just starting how I watched someone go on in front of me at an open mic and do twenty solid minutes of comedy. I couldn’t fathom being on stage that long, and it blew my mind then. And the comedian I watched didn’t do any crowd work or stall tactics either. It was all comedy material, and I was impressed. Now, it’s laughable to even think I ever thought that. If someone asks me to do twenty minutes it’s a night off, and I can do it in my sleep. If I had to go up and do three different twenty minute sets in the same night for the same crowd I could easily do it and have a lot of material left over.  I’m not bragging, but I could do it. I’ve come a very long way, but it took multiple decades of unbelievably hard work and silently suffering through stupid mistakes to get there. I’m doing ok now, but I sure wish I’d had much more of a well laid out battle plan to follow along the way rather than just randomly hacking my way through the thickest part of the jungle the way I ended up doing it. I wouldn’t recommend that method for anyone, and hopefully I’ll help you avoid it. 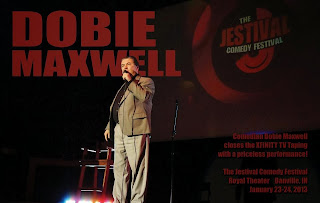 If I had to point out the one major mistake I’ve made on my personal on stage comedy journey, it has without a doubt been not coming up with what I call a ‘high five’. What I mean by that is a roughly five minute chunk of material that gets honed to razor sharpness and is ready to perform at a moment’s notice in any situation. It’s in essence a verbal resume to be used to sell one’s self. This is an extremely valuable tool to have at one’s disposal, and it will come in handy time and time again. I can’t believe it took so long for me to address this issue myself, but it totally did and as usually happens with me it came at the absolute worst possible time. It rocked my world.

I had been doing standup comedy full time for almost twenty-five years when I finally got my first opportunity to appear on national television on ‘The Late Late Show with Craig Ferguson’ on CBS in 2009. I was thrilled beyond words, but then it occurred to me I didn’t have a ‘TV set’, or ‘high five’ to do. I’d been a headliner in top comedy clubs across the country for years and did consistently rock solid sets of 45 minutes to an hour – but I didn’t have a five minute set for TV. I felt like a complete idiot, and quite rightfully so. I had not properly prepared myself for when my opportunity came, and I found myself scrambling to work out my set before I flew to L.A. to film my segment. It was awkward and painful, and I only had about six or seven chances to work on the set that I had come up with. That was not close to being enough, and I totally paid for it. 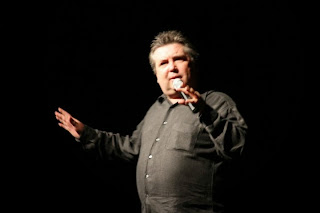 I read somewhere that before Jerry Seinfeld made his national television debut on ‘The Tonight Show’ with Johnny Carson he performed that specific set about eighty times. Eight zero! WOW! That’s a lot of work to hone one set, but looking back on my experience I can see that it just isn’t possible to be too prepared. I had enough experience to fake my way through, but it wasn’t easy. One thing I still can’t believe I was stupid enough to do was perform brand new material I had never tried before on my national television debut. That’s totally insane, but what’s even more insane is that it worked! Well, some of it did anyway. About halfway through my set I ended up flat out blowing a line when I juxtaposed something and for about half a second I was in a panic.

Lucky for me, I have a vast backlog of experience to fall back on and I did just that by bringing out a bit I hadn’t planned on using and finishing out my set with that rather than what I’d told the producer I was going to use. It was the heat of the moment, and my experience got me through it. Afterward, the floor director walked over and congratulated me on my ability to recover with what appeared to be no effort when I told him in fact it had taken decades of effort to know how to get myself back on track like that. He didn’t care about that though, all that was important was that I did the job that particular day, and I did. By all accounts, I had a successful network debut. I have been on all kinds of local and regional television shows, and each time I learn something. Doing standup comedy on television is not the same animal as doing it live in a club scenario. It isn’t important to go into the exact details why now, although I plan on discussing and dissecting it at length in future writings. What is important is starting to put your own ‘high five’ together. I more than strongly suggest that anyone with even the slightest aspiration to pursue standup comedy as a career start embracing this concept immediately if not sooner. However the message needs to be digested, please do so. Don’t make me tap it on your skull with a Louisville slugger.

Having your "high five" in constant development throughout your career will pay you back like no other investment you’ll ever make. It’s a wonderful habit to get into, and I’ve learned to make it a part of my life every time I step on a stage. I wish I’d done that from square one, but I didn’t. I was too busy trying to ego stroke myself by trying to stretch the actual number of how much material I had at my disposal. This is a way too common mistake made by almost everyone, and as of right now you don’t need to be one of them. Comedians like to boast for some reason about how much material they’ve got stored in some mysterious inner comedy vault nobody can touch. 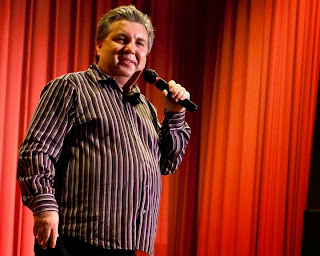 I’ve heard it all and then some, and my bung hole winks every time I hear it again. “I’ve got well over three hours of material,” one particularly cocky but completely clueless idiot said with misguided self assuredness at a show not long ago. When I asked why we all had to sit through the same mediocre thirty minutes over and over again he had no retort to defend his false claim. There’s never a reason to make a claim like that other than to massage the ego so please don’t do it. Even if indeed it happened to be true, what good would it do? Does any network or cable television outlet on the planet have any three and a half hour comedy shows? I haven’t seen any. But what DO they have on a regular basis? Standup comedy in five minute segments. There are half hour and hour specials yes - but I can’t think of anybody who started off with one of those. Most if not all of us have to start out with a five minute spot somewhere. Actually, my Late Late Show spot was only four and a half minutes. People’s attention spans are shrinking by the day. So when I say ‘five minutes’, that could end up being six and it could be four and a half. That’s not the issue. The issue is you need to know what you want to do with that time when you get it. It doesn’t have to be an actual television appearance either. Most auditions for comedy club work are guess how long? Bingo! Five minutes. And how long are most open mic sets? Take a random stab at it. You’re right. Five minutes. That’s the bite size chunk anyone needs to sample your act.

Like I said, it’s a verbal resume that hopefully paints an easy to digest picture to both potential bookers and the audience of exactly who they are looking at on the stage in front of them. There should be no problem for anyone who has just seen your act to describe who you are in just a few words. You may not be able to do that just yet, but it’s something to start building toward NOW. That five minutes should flow so smoothly after a while that you could do it without having to think about it. If you had to go on stage in a pinch for any reason, you could do that five minutes with your brain turned off. That may seem odd now, but it’s totally possible. Start thinking about your ‘high five’ now, even if it’s a few years away from being a reality. You’ve got hundreds of times to practice it, and the only one who knows will be you. You’ll have the jump on everyone.