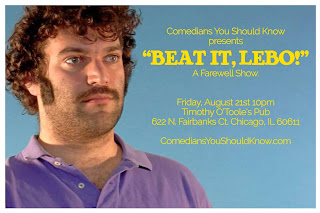 Although we plugged a bunch of outstanding comedy shows on Monday, there is one in particular that needs special attention. The Farewell Show for Mike Lebovitz should definitely be on every Chicago comedy fan's radar. Officially tiled CYSK presents "BEAT IT, LEBO!", this mamoth farewell party & comedy show will happen take place this Friday at Timothy O'Toole's Pub - 622 N Fairbanks.

This will be Mike's final stand-up performance before he moves to NYC to seek his fortune and will feature a who's-who of the Chicago comedy scene. If you your not familiar, Mike Lebovitz  is an absolute comedy monster in the Chicago scene, who has been assaulting audiences with his crazy-bad-dad sense of humor. A surprisingly subversive club favorite. You will be missed Mr. Lebovitz

ONLY ONE SHOW LEFT!!