Chicago-found Comedy Trio, Team Us Comedy will film their first stand up special "Friends With 401(k) Benefits in the distilling room of popular West Loop locale, CH Distillery, it’s unlike any other traditional special — this one will be one special starring three comics. 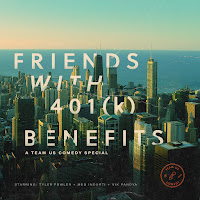 Team Us Comedy, made up of Meg Indurti (semi-finalist for StandUp NBC in 2017), Tyler Fowler (Zanies), and Vik Pandya (opened for Roy Wood Jr. & Michelle Wolf of The Daily Show), started when the three comics decided to produce a comedy show at their own Downtown Chicago office.

The three were new to comedy but it didn’t stop them from having over 200 people in their audience at their first major show in 2016, Laugh Near Minimalist Furniture: A Comedy Variety Show.

Since then, Team Us Comedy have significantly changed their show format but still stick true to their roots of producing comedy shows in non-traditional spaces. They’ve been lauded by The RedEye to The Chicago Reader alike for their ability to cherry-pick a line-up of the city’s top diverse talent, and turn modern spaces into sleek, comfortable rooms for comedy. 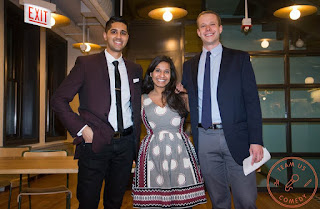 Friends With 401(K) Benefits will be a one hour special recorded LIVE...but that fact alone is the only thing that’s traditional about the special. It will be edited to mix the three different voices into one unique special, cutting from comic to comic talking about a similar topic. From Pandya’s sharp self-deprecation and observational humor on dating to Indurti’s rapid-fire, acerbic one-liners on American culture to Fowler’s hilarious storytelling about growing up catholic and working in corporate America, there’ll be something in there for every taste.

A percentage of all ticket proceeds will go towards the Chicago Arts Partnerships in Education (CAPE), a local organization that brings visual, digital, and performing arts education into Chicago Public Schools.

Check out their promo for the show here!

Written by Team Us ComedyWE'RE A POWER TROUPLE OF IMPROVISERS, STAND-UP COMICS, AND WRITERS BASED IN CHICAGO. WE PRODUCE UNIQUE COMEDY SHOWS IN CHICAGO INCLUDING MONTHLY STAPLES: LAUGH NEAR MINIMALIST FURNITURE, AND COCKTAILS & HUMOR: A STANDUP COMEDY SHOWCASE.
Newer Post Older Post Home