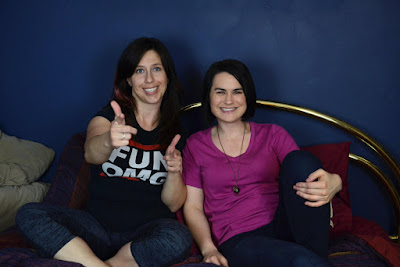 Sarah Albritton and Catherine Povinelli are Chicago comics and co-creators of the comedy web series Super Narcoleptic Girl. Inspired by Albritton’s real-life struggle with Narcolepsy, their “Broad City” meets “The Incredibles” style web series is the story of a low-level Narcoleptic superhero who has the power to make people dance as she struggles to save the day and stay awake.

A special preview of Super Narcoleptic Girl screens tonight, February 5th at The Annoyance Theatre, 7:30PM. Stand up performances at the screening include Shannon Noll, Sonal Aggarwal, hosted by Kevin Kellam. In this interview, Albritton and Povinelli talk about putting together a web series from scratch and what it truly means to suffer from Narcolepsy.

What exactly is narcolepsy? And by having it, what does one experience on a daily basis?

ALBRITTON: Which happens at heightened emotions. So for instance, laughter can be a big trigger.

Can laughing at comedy shows can trigger you to fall asleep?

ALBRITTON: Yep, heightened emotion. Which is why I don’t laugh much at comedy shows.

POVINELLI: And I just thought you were a bitch this entire time!

Does this mean you literally pass out cold? What happens if nobody is around to catch you? 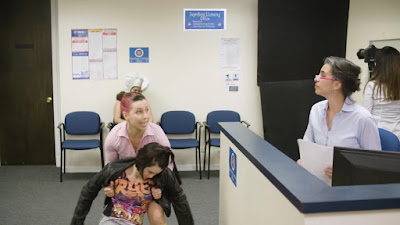 ALBRITTON: Eh, it doesn’t happen a ton because my body knows it’s going to happen. It’s not like I faint and fall backwards. I fall in a certain way where I don't hurt myself -- kind of a collapse on my knees. Also, it usually doesn’t happen when I am alone because something must be there in person to trigger it, for me.

So, a state of heightened emotion triggers you to fall asleep?

ALBRITTON: Correct, to have a cataplexy. Which is a sudden loss of muscle control—the part where you fall down. But, not everyone with narcolepsy has a cataplexy—about half do. The other major symptom of narcolepsy is Excessive Daytime Sleepiness. Which means, narcoleptics feel the way a normal person feels if they didn’t sleep for two or three days straight.

Wow. So there are various symptoms and categories of narcolepsy?

ALBRITTON: Yes. The big ones that I experience are: Excessive Daytime Sleepiness, Disrupted Nighttime Sleepiness, Hypnagogic & Hypnopompic Hallucinations, Automatic Behavior, Microsleeps. There is also Sleep Paralysis, which people without narcolepsy may also have. This is something that can happen to me many times a day. But, there is a lot of medication that has helped make a lot of this better—EXPENSIVE medicine—but medicine nonetheless.

What are the statistics of people living with narcolepsy in the U.S.?

ALBRITTON: It is estimated that 1 in 2,0000 have narcolepsy, but the problem is that only 25% of them are properly diagnosed. So 75% of people with narcolepsy are misdiagnosed or undiagnosed.

When did you know you had narcolepsy?

ALBRITTON: When I was 15, after two years of symptoms. For a while I misdiagnosed. In high school, the symptoms were the worst. I would say now it is more manageable, thanks to the medicine I am taking.

Aside from sleep disorders, what other issues do narcoleptics encounter?

ALBRITTON: There are other struggles that people don’t realize, such as weight gain due to a loss of a chemical in our brain called hypocretin, also known as orexin (this lack of orexin also causes the sleepiness). And because of this, many narcoleptics are overweight. I had an issue with sugar for the longest time because I would eat lots of sugar to stay awake. Another really big thing is confusion or forgetfulness.

You have accomplished a tremendous amount, despite dealing with so many issues from having narcolepsy. It seems like you refuse to let the disorder control your life, and you don’t allow narcolepsy to limit yourself—

POVINELLI: Well, she can’t be a pilot...

ALBRITTON: [laughing] Sure, there are some things I cannot do...

[laughs] I’m talking about being in control of your daily activities. Having freedom and independence. What keeps you going?

ALBRITTON: I think it is out of necessity. None of my family lives here, they’re all in Louisville. I am in a few narcolepsy support groups on Facebook. I am also very fortunate to have the independence that I have because I am on a good medication regimen. But, I just have to be doing stuff, otherwise I am going to sleep my life away. Before I was diagnosed, I slept 18-20 hours a day. I literally slept two years of my life away. I’m not going to do that again. So, every time I am out doing stuff, it really matters to me. There are a lot of goals and things I want to accomplish, and I can’t do everything I want to do by just staying in bed. 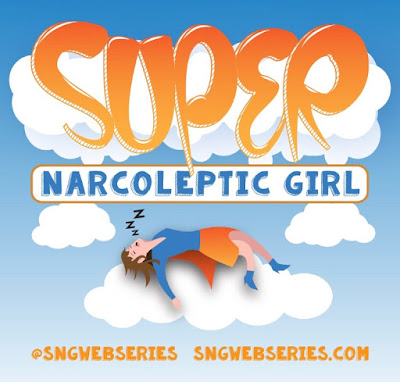 How did the idea for Super Narcoleptic Girl come together?

POVINELLI: Back in 2015, myself, Greg Hollimon, and Sarah were hanging out and Sarah starts telling us about her narcolepsy. She’s just goes, “Yeah...I fall asleep ALL THE TIME!” Joking with her, I go, “You would make the worst superhero ever!” And Sarah’s eyes lit up! Immediately, she said, “We have to write this!” And very soon after, we began!

ALBRITTON: By the way, I was so impressed with Povs because so many people always offer to collaborate, yet they never follow up! It’s really great when you meet someone with great ideas, and then they actually follow through on it.

After the initial idea, how did you know what to do in order to make this happen?

ALBRITTON: We knew we wanted to write a web series. So, we took a video production class at The iO Theater. I knew about lighting because I have a photography background, but everything else I didn’t know. But honestly, we learned more by just doing and researching as we went along.

How did you assemble your crew of videographers, editors, etc.?

ALBRITTON: I did! [laughs] This is how well she knows me. Which is her basically telling me, “Talk slower!”

ALBRITTON: I’m always afraid I’m perceived as annoying because of my medicine, which are uppers. So, it makes me very talkative.

How many episodes is Super Narcoleptic Girl?

ALBRITTON: Eight episodes. Each are about two to three minutes, with one being four-and-a-half. 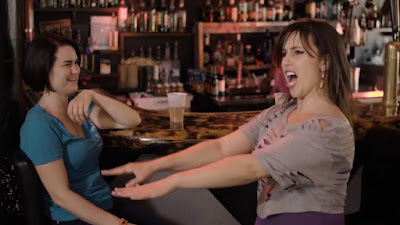 What was your process for developing this web series?

POVINELLI: First, we started off meeting once a week. But then, we realized we needed to meet twice a week because writing is a process.

ALBRITTON: In the early stages, we had read-throughs where we invited different people several times to get different takes on our script.

Did you take any classes to learn screenwriting?

ALBRITTON: I took a spec-writing class with Michael McCarthy at The iO Theater.

POVINELLI: And I took the SNL Sketch Packet class as well as the Talk Show Portfolio class. And together, Sarah and I decided to take TV Pilot Presentation.

What is your ultimate goal for Super Narcoleptic Girl?

ALBRITTON: The dream is that somebody sees it at one of our screenings, realizes its potential, offers us a meeting. Then, we knock it out of the park, and make it into a full television series! Because our budget was so low, we could only do so much with it. But, we have so much more that we can do with this series. 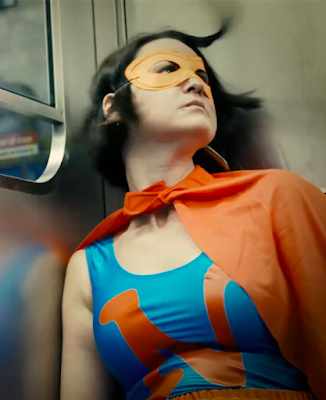 How do you even build a budget with a project like this?

POVINELLI: We raised $5,100 on IndieGoGo.com, thank you to everyone who helped out!

ALBRITTON: We applied for a grant that we unfortunately did not get, so the remaining funds we had to figure out for ourselves. And call in a lot of favors.

Were there ever any low points that made you want to quit?

POVINELLI: There was never any point where Sarah and I ever thought that this was not going to happen. Once we started this, we both were fully on board no matter what. There were definitely obstacles. For example, in an episode we did with Kristen Lundberg, her mascot costume is a GIANT PARROT. We went through so many trials and tribulations finding that. But, we found an amazing costume constructionist who helped us out.

ALBRITTON: Costumes and props/animals were definitely the toughest. For instance, we wrote a scene where originally we wanted to use a spider, but we could not find one for filming.

POVINELLI: And neither of us wanted to buy a tarantula...

ALBRITTON: So then we thought, “What about a lizard? Or a gecko?” So we go to a pet store, and this lizard jumps out at Povs! [laughs] So Povs is like, “OH NO! IT’S A BABY DRAGON!” [laughing] She refused to hold it. So eventually, we decided on a turtle named Michelangelo.

What advice can you give to anyone thinking of starting their own web series?

POVINELLI: Find someone that you really want to work with, because you will spend a lot of time with them. Know that you will have ups and downs, like any relationship. But, don’t give up. You will run into a lot of things that will make you go, “Fuck this!” But, if you really want to make something, the reward is incredible compared to what you thought was shit that day. Your work will pay off.

ALBRITTON: Yes, and also be prepared during pre-production. Be organized ahead of time for everything you need. We did everything by the book. We wanted to do everything right.

How has the response to Super Narcoleptic Girl been thus far? 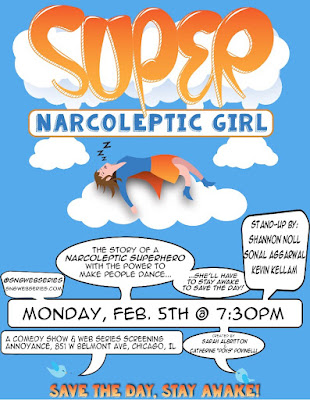 POVINELLI: Since releasing the trailer, we have had an outpour from people with narcolepsy. I have been genuinely impressed by the response as well as Sarah’s response to those people providing support. To hear their stories and life experiences is so interesting seeing the community in this way, because I have never been part of it before.

What do you hope people will learn about narcolepsy through this web series?

ALBRITTON: I hope people will realize that there is a lot more to invisible disabilities as a whole. Invisible disabilities are strongly misdiagnosed and strongly misunderstood, and people just assume that these people are making it up, which is really frustrating. So, I do hope that it will bring awareness. And yes, the character in the series has narcolepsy, but the story isn’t just about narcolepsy. The story is about her getting through life. Yes, narcolepsy is part of her life, but it’s not the most important part of her. I feel that translates the most to my life. Narcolepsy is part of who I am, but it doesn’t dictate who I am.

Written & Interviewed by David Gavri
Contributing Writer David Gavri is comedian, producer, and writer who performs all around the Chicago comedy scene